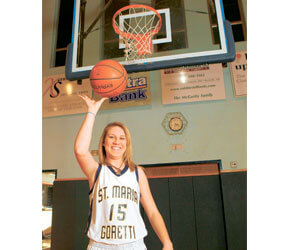 A valuable gem can be found at St. Maria Goretti High School in Hagerstown.

Colleen Costello, a senior at the school and a member of nearby St. Ann Parish, has carved out a memorable legacy in athletics, the classroom and her community.

“She’s one of the strongest leaders for a young person that I’ve ever been around,” said St. Maria Goretti’s Director of Athletics David Blenckstone. “Kids respect her, they look up to her. To be honest, her coaches do too.”

The youngest of five Costellos to attend St. Maria Goretti, Colleen has earned assorted all-star honors in Frederick County as a first baseman in softball, goalie in soccer and center in basketball, where this is her fourth varsity season.

“Basketball is definitely where my heart is,” she said. “I love playing the game and I love being on the court.”

Costello carries a 3.94 grade point average on a 5.0 scale, with a course load that Advanced Placement Calculus, British Literature, Psychology and honors classes in Human Anatomy and Physiology.

She served on the Goretti homecoming and prom committees, and is president of the Varsity Club.

“We promote school spirit and pep rally experiences,” Costello said. “We also organize community service projects, trying to get the school to bond and do activities together.”

The club’s fundraisers included one that provided a Christmas meal and presents for four families. Costello has performed missionary service the last two summers, working on houses in Greensburg, Pa., and Virginia Beach, Va.

Costello plans to attend a college in the East and major in nursing, with the goal of becoming an OB/GYN nurse practitioner. Wherever she goes, her her absence at Goretti will be noticed next fall.

“Athletically and academically we’re really going to miss her next year,” Blenckstone said. “She does so many things for the school. She’s certainly made her impact here over the last four years.”