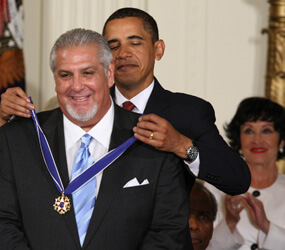 The honorees were chosen “for their work as agents of change,” in a variety of fields, including the arts, sports, medicine and politics.

In a ceremony in the East Room of the White House, President Barack Obama said in introducing his first Medal of Freedom honorees that “what unites us is a belief … that most American of beliefs that our lives are what we make of them.”

He said each of the honorees was “an example of a life well-lived.”

As a recitation of individual accomplishments was given, Obama stood with each recipient to bestow the medallion. He also presented a plaque for family members accepting the honor on a recipient’s behalf.

Robinson was the first female president of Ireland, from 1990 to 1997. She then served as U.N. High Commissioner for Human Rights for five years and continues to work for global medical care and for protection of human rights amid globalization.

Kennedy, a Democrat from Massachusetts, was honored for his accomplishments during his 46 years in the Senate, particularly his work in education, civil rights and health care. The Medal of Freedom ceremony was held a day after the death of Kennedy’s sister, Eunice Kennedy Shriver. She had received the same honor in 1984 for her work in founding and running the Special Olympics.

Kennedy was diagnosed in May 2008 with a cancerous brain tumor and has been in Washington infrequently since then. He did not attend the ceremony, but was represented by his children. His daughter, Kara Kennedy, accepted the award on his behalf.

A fourth Catholic, dancer, actress and singer Chita Rivera, was honored for “breaking barriers and inspiring a generation of women to follow in her footsteps.” The first Hispanic recipient, in 2002, of the Kennedy Center Honors, Rivera has long been known as a devout Catholic.

Her Web site tells the story of rumors in 1955 that she and actor Ricardo Montalban were having an affair when they co-starred in “Seventh Heaven.” The two were seen frequently leaving the theater together after performances.

“Far from having an affair, the two Roman Catholic actors were leaving the theater to attend Mass at a 42nd Street church,” the site said.

The honorees were as diverse demographically as the variety of their professional success. They represented the worlds of science, mathematics, entertainment, humanitarian and civil rights work, religion, anthropology, sports, the judiciary, medicine, charitable fundraising and politics.

Honorees included a Native American; other U.S. natives; citizens of Bangladesh, South Africa, England and Ireland; and a dual citizen of the Bahamas and the United States.

One recipient, Anglican Archbishop Desmond Tutu of South Africa, was described by Obama as being the “cantor of our conscience.”

Honored posthumously were Harvey Milk, the nation’s first openly gay elected official in a major city, who was murdered in 1978, and Jack Kemp, a former professional football player, congressman, U.S. housing secretary and vice presidential nominee, who died in May.