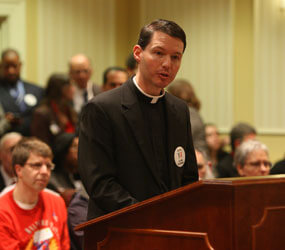 ANNAPOLIS – A Senate hearing room was filled beyond capacity Feb. 8 as members of the Judicial Proceedings Committee heard passionate testimony for and against a proposal to legalize same-sex marriage in Maryland.

Supporters of Senate Bill 116 argued that same-sex marriage should be a civil right, while opponents maintained that marriage is the fundamental building block of society and should not be altered.

Father Erik Arnold, pastor of Our Lady of Perpetual Help in Ellicott City, joined several other religious leaders in pointing out that marriage has always held a special place in society as the union of a man and a woman.

It is the “the one relationship,” he said, “that is capable on its own of bringing a new baby boy or girl into the world and of providing that baby with a unique and complementary love of his father and mother.”

Maryland has held marriage in a special place, Father Arnold said, because of the contribution husbands and wives make to building up society.

“To want to hold onto this special place is not narrow-minded or bigoted – I am not,” he said. “It’s simply the recognition that it truly is a unique institution that so contributes to the wellbeing of our society that it is worthy of special recognition.”

“And that’s provided by marriage between his or her biological mother and father,” Father Campbell said. “This is the most fundamental societal unit that our country was founded upon and it promotes continued and orderly growth for our society.”

“We welcome all people because all people are created in the image and likeness of God,” Father Campbell responded. “The Church accepts people as they are. What we do with who we are is a different story.”

The pastor emphasized that the Church “looks at marriage as between a man and a woman.”

Sen. Richard S. Madaleno, an openly gay lawmaker and lead sponsor of the bill, was among several homosexual proponents who said they felt discriminated against by the state’s marriage laws. He said the term “partner” cheapens his relationship with a man he “married” through his church a decade ago.

“It makes us sound like we are simply in business together,” Sen. Madaleno said. “It is a badge of dishonor I must wear every day because my state will not recognize civil marriage.”

“We are here not as a hate group,” she said, “and to claim that our view is one of simple discrimination simply dismisses many of the valid arguments you’ve heard before you.”

Russell raised concerns that the bill contains no genuine religious freedom protections. In written testimony, she pointed out that the bill’s title, the “Religious Freedom and Civil Marriage Protection Act” is misleading since the Constitution already establishes that no clergy member or religious institution can be required to solemnize a marriage in violation of the right to free exercise of religion.

“We are certainly very concerned about the very bald language in this bill when it comes to religious exemptions,” Russell told lawmakers at the hearing. “I do think that any religious organization will be very concerned were a bill like this to pass about their ability to maintain their religious principles.”

Gov. Martin J. O’Malley said he will sign the bill into law if it reaches his desk.

Visit www.catholicreview.org/matysekblog for a video report on the hearing.