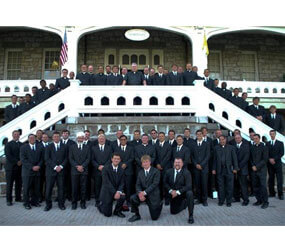 EMMITSBURG – At a time when some seminaries are struggling, Mount St. Mary’s University Seminary in Emmitsburg is booming.

The historic Frederick County institution has hit a 10-year enrollment high – filling the seminary to capacity with 164 students, including eight from the Archdiocese of Baltimore.

Bishops from 30 dioceses now send seminarians to “The Mount,” with the Diocese of Peoria, Ill., sending the most, at 20.

“It’s certainly a vote of confidence in what we do and how we do it,” said Monsignor Steven P. Rohlfs, rector. “We’ve always been a niche for those who want to educate normal, parish priests. We don’t specialize in anything but diocesan parish priests.”

With the appointment of several new bishops, dioceses that had not sent their men to Mount St. Mary’s in many years have reestablished their historic connections to the seminary.

The seminary has an international presence with about 10 percent of the students hailing from Spanish-speaking countries. There are also students from Sri Lanka, Togo, Poland and other countries, as well as seminarians from two religious orders.

Jaime Garcia-Vasquez, a 27-year-old seminarian studying for the Archdiocese of Baltimore, enrolled at Mount St. Mary’s after studying in his native Colombia. He described the school as a place where everyone supports each other. There’s a strong sense of brotherhood and a family atmosphere among the seminarians, he said.

“You have big support in the spiritual life,” he said. “They are not just good teachers; they are also good people. They are helping us very hard to be the best we can and the best priests in the future.”

As part of their formation, each seminarian has a spiritual director who usually also serves as a confessor. Students are expected to make daily holy hours before the Blessed Sacrament.

“A normal seminarian is spending around three to three-and-a-half hours in prayer a day,” Monsignor Rohlfs said.

Seminarians receive “human formation” to hone their personalities in service of the church.

“God uses the personality of the priests as sort of a lure to bring other parishioners to the Gospel,” Monsignor Rohlfs said, “so if your personality is helpful, then we try to enhance it. If it needs working, we try to help you sand off some of the rough edges.”

Intellectual formation is another key component to make sure future priests understand their faith and are able to articulate it to others, Monsignor Rohlfs said. Pastoral formation prepares men to preach, teach, hear confession, be spiritual directors and work in parish ministry.

“I’m always impressed with the caliber of seminarians today,” said Monsignor Rohlfs, noting that many sending dioceses have had strong vocational recruitment in recent years.

“Today’s seminarian is much more instinctively loyal to the church, much more zealous and much more prayerful than when I was a seminarian back in the 60s and 70s,” he said.

Father Michael Roach, pastor of St. Bartholomew in Manchester and a church history professor at Mount St. Mary’s for 33 years, said the seminary has a strong faculty. Many parish priests serve on the faculty, he said, which gives students a “practical edge.”

“Beginning in the ‘70s and ‘80s, more bishops began to give us a second look, in part because of the dependability of our moral theology,” he said. “We draw largely from southern and western dioceses where vocations are still strong as opposed to the great urban centers of the east.”

Monsignor Rohlfs agreed that one of the greatest strengths of the seminary is its reputation for fidelity to church teachings. Known as the “Cradle of Bishops,” 51 graduates have gone on to become bishops.

“In the last six years, we’ve ordained around 145 men and all but three are still in the priesthood,” he said. “That’s a pretty good survival rate.”

Visit www.catholicreview.org/matysekblog for a video report on the enrollment boom at Mount St. Mary’s.