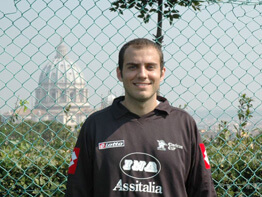 SAN DIEGO – Their soccer team may be called the Martyrs, but that doesn’t mean seminarian Jacob Bertrand and his teammates will just let their opponents beat them.

“We do recognize the irony,” Bertrand said in an interview by e-mail with The Southern Cross, newspaper of the San Diego Diocese.

The Martyrs took their name from St. Isaac Jogues and his missionary companions, who spread the Gospel among the Huron Indians, were murdered by the Iroquois and were among North America’s first canonized saints.

Composed of about 18 students from the Pontifical North American College, the U.S. seminary in Rome, the team is one of several competing in the Clericus Cup, a soccer competition among international seminary colleges in Rome.

“The martyrs are the great witnesses of the faith and this soccer match is an opportunity to be a witness and example,” said Bertrand, 23, a graduate of the University of San Diego and the priestly formation program at St. Francis Center in San Diego. He recently began his graduate studies at North American College.

The creation of the Clericus Cup was announced in mid-December, with the first soccer matches held in February and the championship game scheduled for June.

Bertrand said the purpose of the contest is both to evangelize the sports community and to show Catholics around the world that their future priests are young, healthy team players who are passionate about life.

“The moral life has become secondary for a good number of sports stars and good sportsmanship has seemingly got lost somewhere in the red zone,” he said. “The goal then is ultimately to show sports enthusiasts that the game can be played to express the love of neighbor that God has called us to.”
At Clericus Cup games, the atmosphere is markedly different from many secular sporting events, where players engage in foul-mouthed shoving matches on the field and agitated fans riot in the stands.

“The difference lies in the charity,” Bertrand said, both on the field and in the stands.

Prayer also plays a visible role, he said, noting that each game begins and ends with prayer, and an official chaplain blesses the teams before they begin playing.

Bertrand, who played soccer until age 14, has always considered himself athletic. He also has played baseball, football, basketball, tennis and volleyball.

At one time, baseball was so important that he believed the words on his favorite T-shirt: “Baseball Is Life, The Rest Is Just Details.” But the God who had once been lumped in with “the rest” is now at the center of Bertrand’s life.