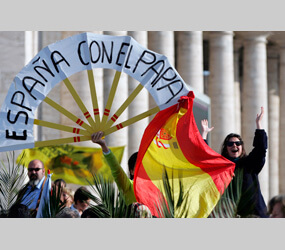 “Sacrifice and renunciation belong to the just life. Whoever promises a life without this continuing gift of self is fooling people,” the pope said during the liturgy in St. Peter’s Square April 5.

The papal liturgy began with a procession of hundreds of cardinals, bishops, priests and lay people, who carried palms and olive branches in commemoration of Christ’s triumphal entry into Jerusalem a few days before his passion and death.

At the head of the procession, nine young people from Australia carried the World Youth Day cross to the altar, where it was later consigned to a group of Spanish youths for the next international celebration of World Youth Day in Madrid.

The pope, his red vestments resplendent in the sunshine, carried a braided garland of palm fronds across the cobblestoned square. It was the first of seven major Holy Week events for the pope, who turns 82 later in the month.

In his homily, Pope Benedict commented on Jesus’ words after his entry into Jerusalem: “Whoever loves his life loses it, and whoever hates his life in this world will preserve it for eternal life.”

Christ’s message was that the person who wants to live only for himself and exploit all life’s possibilities for personal gain finds that life itself becomes “boring and empty,” the pope said.

The principle of love, which is at the heart of the Christian faith and is exemplified in Christ’s crucifixion, demands a more universal vision that looks outward and not just inward, he said.

This orientation toward others involves not only a “single great decision” in a person’s life, which is relatively easy, the pope said, but must be a continuing attitude implemented daily in everyday situations.

“No successful life exists without sacrifice. When I look back on my personal life, I have to say that precisely the times when I said ‘Yes’ to a sacrifice were the greatest and most important moments of my life,” he said.

The pope said the days Jesus spent in Jerusalem also highlight the fact that self-sacrifice produces inner doubt and anguish. Even Jesus asked whether he should turn to God and say: “Father, save me from this hour.”

That Jesus suffered in this way offers an insight into prayer, which sometimes involves questioning and lament in the face of suffering and injustice, the pope said. Everyone can and should pray this way, he said.

“Before God, we shouldn’t take refuge in pious phrases, in a fictitious world. To pray always signifies struggling with God, too,” he said.

At the end of the liturgy, the Australian young people transferred the tall wooden cross and an icon of Mary to a group of young Spaniards, who were taking the two symbols on a spiritual pilgrimage ahead of the next World Youth Day international gathering in Madrid in 2011.

The pope recalled that he presided over World Youth Day events in Sydney, Australia, last summer. He said the cross’s pilgrimage was deeply symbolic.

“The cross is in movement from one side of the world to the other, from sea to sea. And we are accompanying it,” he said.

A group of 150 Spanish Catholics – bishops, priests and young people – were in Rome for preliminary planning meetings for the 2011 encounter. They cheered and waved Spanish flags when the pope, speaking after the Mass, encouraged them to prepare a spiritual path toward the international gathering.

The 2011 encounter has as its theme: “Rooted and built up in Jesus Christ, firm in the faith.” The quotation is taken from the Chapter 2 of St. Paul’s Letter to the Colossians.

On April 6, the pope met with some 7,000 young Spaniards who traveled to Rome for the Palm Sunday liturgy, and spoke about World Youth Day as an opportunity to experience the joy of belonging to the church.

“The World Youth Days demonstrate the dynamism of the church and its eternal youth. Whoever loves Christ loves the church with the same passion, because it allows us to live in a close relationship with the lord,” he said.