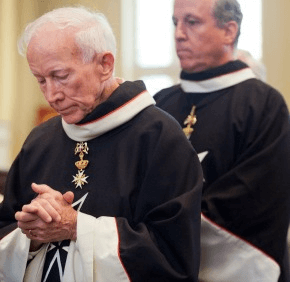 By Paul McMullen
pmcmullen@CatholicReview.org
Twitter @ ReviewMcMullen
CORRECTED JULY 21, 2014 — Even before a Catholic organization that is the world’s oldest continuous order of chivalry took her to a landmark shrine, Stephanie Bozylinski Flaherty considered herself to be the beneficiary of divine providence.
Diagnosed with Stage 4 breast cancer in April 2004, Flaherty was given two to three years to live. She kept beating the disease, but last October endured brain surgery for the sixth time. Afterward, her neurosurgeon had no explanation for the pathology report that could not locate the lesion found in an earlier MRI.
“I didn’t want to say that it was the Lord,” Flaherty said.
Her considerable stock in the power of prayer had included asking for the intercession of what she describes as charismatic “elders” at the Catholic Community of St. Francis Xavier in Hunt Valley.
“After my last surgery, I was asked to talk to their prayer group,” Flaherty said. “After I told them my story, Kay Kness said, ‘You need to talk to the Knights of Malta.’ ”
Flaherty had never heard of the lay order that was promoting religious liberty nine centuries before the conclusion of the U.S. Conference of Catholic Bishops’ third annual Fortnight for Freedom July 4.
She did not know of their giving, of the time and money they donate to accompany those in need of physical and spiritual healing to Lourdes, France, where pilgrims by the thousands seek a miracle similar to the visions of the Blessed Virgin Mary who appeared to Bernadette Soubiros 18 times in 1858.
That lack of notoriety for the Knights, it seems, is by design.
LOW PROFILE
According to “The Church Visible: The Ceremonial Life and Protocol of the Roman Catholic Church,” the “Sovereign Military Hospitaller Order of St. John of Jerusalem, of Rhodes, and of Malta” dates to A.D. 1070, when it was established to care for pilgrims during the Crusades. It received papal recognition in 1113. The order has been a naval power, forced from the Holy Land, Rhodes and then Malta – by Napoleon Bonaparte – and has been headquartered in Rome since 1834.
There are approximately 13,500 Knights and Dames, including 51 in the Baltimore area, but the order is not listed in the Archdiocese of Baltimore directory.
Monsignor Richard E. Cramblitt, Flaherty’s pastor at St. John the Evangelist in Hydes, was impressed by the order when he served at the Shrine of the Sacred Heart in Mount Washington.
“It was Ligia Remick,” he said, of a since-deceased Dame, “who told me, ‘We do a lot of good work. We do not trumpet it.’
“The Order of Malta is one of the world’s most efficient organizations of charitable care, and it’s all done privately. The Knights don’t go out and raise money. They don’t advertise themselves. They just do it.”
Its local ranks include leading Catholic philanthropists, who tell of being recruited by patriarchs named Baird or Deering.
Knights and dames, rather than spend on another club membership, devote themselves to fulfilling the order’s charism, of caring for the poor and the sick.
Health Care for the Homeless launched a mobile clinic, a large van that has two examination rooms, in Baltimore July 8. Its partners in the project include Mercy Medical Center and a donor from the Order of Malta, who asked to remain anonymous.
“Their investment made this project possible,” said Kevin Lindamood, president and CEO of Health Care for the Homeless.
The Order of Malta recently became active in prison ministry. It operates 20 hospitals, including one in Haiti, and a birthing hospital in Jerusalem, near its roots.
“It is a stone’s throw from where Jesus was born,” Monsignor Cramblitt said. “The majority of the women are Palestinian. Nobody is turned away. Here is a Roman Catholic religious order, providing medical care to mostly non-Christian women, all in the name of Jesus.”
Then there are resources it musters for its annual pilgrimage.
‘I GOT THIS’
The order’s main annual gathering is in May, in Lourdes, where members travel as support for “malades” – in French, sick people.
Those from the United States must be able to handle a trans-Atlantic flight, but their journey begins the previous winter, with rigorous medical and pastoral screening. In Baltimore, the latter has occurred at Mercy since 2012.
“By the time the candidates get here, they have already been clinically vetted and cleared,” said Father Thomas R. Malia, assistant to the president for mission at Mercy. “We have a team of physicians and nurses, to determine whether people could benefit from a trip to Lourdes.”
Sitting at the dining room table at her home in White Hall, Flaherty, 47, does not appear to be someone whose medical history, condensed for a layman, runs two single-spaced pages.
“There are people who look far worse than me,” Flaherty said, of her fellow malades. “They’re in wheelchairs, on oxygen tanks. When the invitation came to go on this pilgrimage, I told them, ‘I won’t go if my daughter can’t come.’ She was a part of this.”

Stephanie Bozylinski Flaherty was among the “malades” the Order of Malta took to Lourdes, France.
(Tom McCarthy Jr. | CR Staff)
Teagan Quinn Flaherty celebrates her 10th birthday July 20. Her birth was induced four weeks prior to her due date, when her mother was between sessions of chemotherapy to halt the cancer which had been found in her lymph nodes and liver.
“She (Stephanie Flaherty) is a miracle,” said Dr. Neal Naff, her neurosurgeon, who performed all those surgeries on her brain. “I would use that term for her. She is a long-term survivor of metastatic cancer. … Overall, her course is miraculous.”
Flaherty went to Lourdes two months ago, along with her daughter and her husband, Brian, who went as her caretaker. All their expenses were paid by the Order of Malta, whose members are assigned to teams that move malades to Mass and candlelit processions and the healing baths, all in a cart similar to a rickshaw.
“They pushed and pulled me all through town,” Flaherty said. “Even in a coffee shop, with money in my hand, ready to pay, one of the Knights said, ‘I got this.’ This is an honor for them.”
Mike Dodd, a parishioner of Holy Family in Davidsonville who is battling cancer of the prostate, was taken to Lourdes by the order and had a similar experience.
“The people in the Knights of Malta are a unique group,” said the 68-year-old ophthalmologist. “I was impressed with the religious component, the charitable component and the medical component of the order.”
SPIRITUAL CURE
Monsignor Cramblitt is a keen witness to that first component. A member of the order since 2001, he makes his annual retreat with the Knights and Dames.
“Lourdes is a place unto itself,” he said. “The values there, especially when the Order of Malta is present, are not the values of this world. In our culture, all you see are healthy, vibrant people. At Lourdes, the sick are front and center; they take precedence over everyone else.”
The Catholic Church has certified 69 medical cures as miracles attributable to Lourdes.
“The official list is small, but the number who tell you they are cured is quite large,” Monsignor Cramblitt said. “Their (malades’) world is one of constant medical clinics, stress of illness, tension in the household. At Lourdes, they come to a peace with themselves, and the situation they are facing.
“For many, it is as much of a cure as ‘God has not abandoned me.’ ”
The order’s pilgrimage includes Sunday Mass for some 25,000, but worship is a part of every day, which the Baltimore group went to lengths to reinforce.
The order’s Federal Association, based in Washington, D.C., had chartered a jet for an April 30 departure out of BWI, but mechanical difficulties forced 48 malades, 56 companions, 216 Knights and Dames, and clergy and other volunteers to spend that night at the Lord Baltimore Hotel.
Delayed 24 hours, the leadership team figured Mass would be an appropriate use of their time.
Pat Monaghan, a parishioner of St. Joseph, Cockeysville, and Knight since 2001, could not reach anyone at the Basilica of the National Shrine of the Assumption of the Blessed Virgin Mary in Baltimore, so he went there on foot and bumped into the rector.
Monsignor Arthur F. Valenzano, now back in chemotherapy for recurring cancer, had been taken to Lourdes as a malade by the order in 2008. He located a sacristan, and the Order of Malta held a 1 p.m. Mass.
“Everyone was already wiped out,” Monaghan said, “but that healing Mass was one of the most inspirational religious experiences we have ever had.”
Archbishop William E. Lori celebrated Mass for the Knights and Dames at St. Ignatius in Baltimore June 24, on the feast of their patron, St. John the Baptist.
A 2014 Lourdes reunion will be held July 18-19 at Mount St. Mary’s in Emmitsburg.
They have a lot to talk about; just don’t ask the Knights and Dames to talk about themselves.
Note: An earlier version of this article incorrectly reported the year women were admitted to the Order of Malta. Women have been in the order, in the United States, since at least 1986. The earlier version also incorrectly reported that knights of justice and of obedience are restricted to those of noble lineage.
The Review regrets the errors.
Also see:
‘A walk down memory lane’: Archdiocese of Baltimore bids farewell to Bishop Rozanski
Voters in two states consider legalizing recreational pot in 2014
Knights of Columbus pledges $1.4 million to Special Olympics
PrevNext