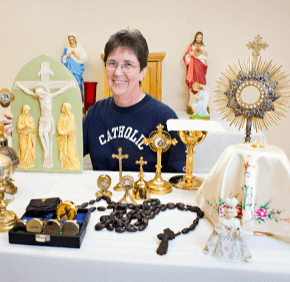 By Elizabeth Lowe
elowe@CatholicReview.org
Twitter:@ReviewLowe
KINGSVILLE – In the last 25 years, Anita Schatz has salvaged what she estimates as 100,000 unwanted religious items.
Church furnishings, vestments, sacred vessels and other religious articles, such as monstrances, oil stocks and rosaries, are among the discarded items she has given a new home.
“I want to get those that are being thrown in dumpsters,” said Schatz, 61, a parishioner of St. Stephen in Bradshaw. “I like doing this sort of thing. It gives me great pleasure.”
Currently, Schatz’ reserve of rescued and restored items is sparse.
“The supply is what I need,” she said.
What Schatz has is stored in the expansive basement of her Kingsville home, which features a chapel that seats 30. She also grows her own grapes and makes wine, which is used during liturgies celebrated in the chapel.
She has sent items around the world, to Kenya, Philippines, Russia, Ukraine and other countries, and to parishes right here in the Archdiocese of Baltimore, such as Christ the King in Towson.
“A priest knows a priest and word gets out,” Schatz said of her ministry, which is named “Mary’s Servants.”
Christ the King has received chalice veils, a lectionary and brass and silver crucifix, said Father Edward Meeks, administrator of the former Anglican parish.
“There’s a two-fold benefit to Anita’s ministry,” Father Meeks said. “One, of course, is the benefit that is derived by the people who are the recipients. The other benefit is that these liturgical items don’t get lost to the (Catholic) Church.
“Unfortunately, things that have been used in sacred worship end up in flea markets. It is a real blessing to the church, that there’s someone who takes the time and makes the effort that these items are saved and wind up in churches.”
In an email to the Catholic Review, Vincentian Father Abel Agbulu, pastor of St. Patrick’s in Bodo City, Nigeria, wrote that his parish has “benefited immensely” from the religious items it has received from Schatz, which include tabernacles, crucifixes, chalices, vestments and prayer books.
“The Church of St. Patrick may not have been able to afford most of these items, hence the donations of these items go a long way to assist us,” Father Agbulu wrote.
Schatz began salvaging items in 1988, about a year after she started making and donating rosaries to the Oblate Sisters of Providence in Arbutus.
At the religious order’s motherhouse, Schatz met an Oblate Sister who supplied missionaries with “whatever she could get her hands on,” Schatz said. Schatz noted the religious sister’s actions inspired her ministry, which is named for the Blessed Virgin Mary.
“I’m very devoted to Our Lady,” Schatz said. “Mary is a servant; I’m a servant to (Mary) the servant of our Lord.”
Have items to donate? Call 410-817-4659 or email amschatz@comcast.net.
Also see:
Summer tradition on Christmas menu in Bradshaw
Brain-dead patients prompt new questions about end-of-life decisions
Prayers from a stranger #CRBlog
PrevNext