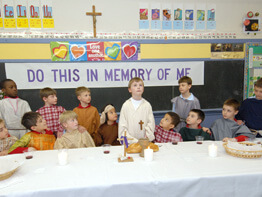 DENVER – It looked amazingly like the Leonardo da Vinci painting of the Last Supper – only the faces seated around the long table were those of 7- and 8-year-olds.

For some 15 years, Karen Merten has had her second-graders at Blessed Sacrament School in Denver re-enact the Last Supper to deepen their understanding of what took place on Holy Thursday when Christ instituted the Eucharist. The exercise not only helps them prepare for Easter, but also for their first Communion in May.

Merten’s class held a dress rehearsal of the play March 29; they were to present it for parents on Holy Thursday, April 5. As narrators set the scene of Jesus celebrating the Passover meal with his Twelve Apostles, the action began.

“Today I come to celebrate a meal,” proclaimed Jesus, otherwise known as Paul Meaney. “Who will eat this meal with me?”

“I am Simon, a fisherman. I will be called Peter and will become the first head of the church on earth,” responded Eli Bartlett as he stood. “I will eat this meal with you.”

When Judas Iscariot spoke, announcing that he would eventually betray Jesus, one apostle, the only one played by a girl, Elaine Matucan, protested: “I don’t get that.”

“You don’t get what, Elaine?” Merten patiently asked.

It turned out Elaine didn’t feel it was right for Judas to be at the Last Supper because he was a traitor. For second-graders, the moral code is black and white, never gray.

The play continued. To include everyone – the class has a dozen boys and six girls – females serve as narrators and play biblical characters important to Jesus’ life, including Christ’s mother, Mary. The extra characters explain that while they were not at the Last Supper they played integral roles in Christ’s life.

As Jesus started to wash the apostles’ feet, a few giggles slipped out. After instituting the Eucharist and exhorting the apostles to “Do this in memory of me,” Jesus concluded by giving them a new commandment: to love one another.

The children prayed the Our Father, then sang a lively reggae-style song describing Christ’s resurrection, “Glory Be to Jesus.”

After the play, the children shared their thoughts about it.

“I like doing it,” announced Eli. “It’s fun – we get to drink grape juice and we’re going to eat French bread.”

Explaining what the play is about, Paul said: “It’s about the Last Supper, the last time Jesus was with his disciples, the last dinner he would eat with them. And it was the first Communion.”

One boy who knew a great deal about his character – that he was the youngest apostle and took care of Mary after Jesus’ death on the cross – admitted a bit of confusion nonetheless.

“My character is John, brother of Jay-mez. I don’t know which Jay-mez, because there’s two Jay-mez,” confessed Lorenzo Marquez, referring to James the Lesser and James the Greater.

Reliving the Last Supper with the children renews her own appreciation for the sacrament of the Eucharist, said Merten.

“The children at this age are so faith-filled that they help me renew my own faith,” she said, noting their innocence and openness. “They have a way of bringing you back down to what everything is about.”