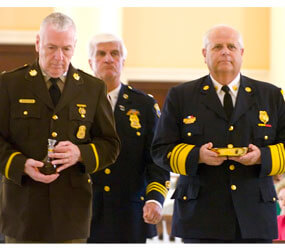 On May 16, there was little doubt that the Basilica of the National Shrine of the Assumption of the Blessed Virgin Mary was the safest place in Baltimore.

Police, firefighters and other emergency personnel such as paramedics and emergency medical technicians (EMTs) gathered Feast of the Ascension for a special Blue Mass celebrated by Archbishop Edwin F. O’Brien.

It was the second year in which the archbishop honored the men and women who serve in police and fire departments. The Blue Mass tradition began more than 10 years ago in St. Paul, Minn., and the archbishop brought the concept to Baltimore last year.

Men and women in uniform from the Baltimore City Police and Fire Departments and the Maryland State Police, along with non-uniform administrative staff and retirees, were in attendance with friends and family. Throughout the Mass, Archbishop O’Brien made a special point to recognize the personnel and their families, acknowledging the sacrifices they each make every day. During his homily, the archbishop commended the dedication, selflessness and bravery of the police and fire department employees.

“How transparently clear is your vocation to give your life for ours. Twenty-four/seven you lay down your lives for service – for your family and friends, for your neighbors and even for strangers, whom Jesus told us to love,” Archbishop O’Brien said. “We honor you, we salute you, we thank you.

“This morning, may all of us learn from your example.”

Donald W. Heinbuch, Assistant Chief of Operations for the Baltimore City Fire Department, took up the offertory at Mass. Heinbuch, who has served in the fire department since 1970, attended the first annual Blue Mass last year, and would not have missed this year’s celebration.

“We really appreciate the religious community looking out for us,” Heinbuch said. “Our men and women have a tough job sometimes. It’s not just the responses, but it’s the impact of the responses that can get to them, such as time lost with family.”

Firefighters and emergency personnel from Oldtown Fire Station Engine 6 were called out not once but twice for emergencies – once just before Mass and then again during Mass. This goes to show that not even a Mass in their honor can keep these emergency responders away from their commitment to serving others.

The archbishop asked the congregation to pray for their safety while out on duty. “Know you are in our prayers not just on this day, but daily,” Archbishop O’Brien said.