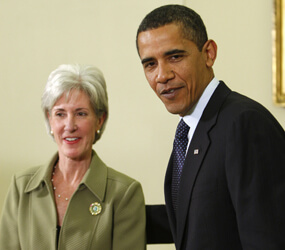 WASHINGTON – The Senate confirmed Gov. Kathleen Sebelius of Kansas as secretary of the Department of Health and Human Services by a 61-35 vote April 28 and she was sworn in to the post hours later.

During the Senate debate, Sen. Chris Dodd, D-Conn., who is Catholic, attributed the delay in confirming Sebelius to “petty politics” and praised the Obama administration for its commitment to base department decisions “on the best available science, not the political ideology of the moment.”

“Americans need to be assured that they will not lose the private health coverage that they want to keep or that their treatment options will have to be approved by a government bureaucrat,” McCain said. “While I respect the right of President Obama to nominate Gov. Sebelius to be the next secretary of HHS, she has failed to provide us with those assurances, and I regret that I cannot support her confirmation.”

Sebelius, who is Catholic, has drawn strong criticism from Archbishop Joseph F. Naumann of Kansas City, Kan., who said in 2008 that she should not present herself for Communion until she publicly repudiates her support for abortion.

The archbishop said his decision was based on Sebelius’ “30-year history of advocating and acting in support of legalized abortion.”

Even before Sebelius’ nomination was formally announced in early March, a group called Catholics for Sebelius launched a Web site – www.catholicsforsebelius.org – touting the governor’s Catholic background and her actions in support of “the common good.”

In a statement after the vote, Chris Korzen, executive director of Catholics United, which sponsored the Catholics for Sebelius site, said the Senate action “ends weeks of politically motivated delay tactics that have left our country facing a looming public health crisis without a Health and Human Services secretary.”

“We call on Secretary Sebelius’ opponents – particularly those in the Catholic community – to accept the Senate’s decision and join her in working toward common-good-oriented public policy that will benefit human life at all stages.”

Obama said at the swearing-in ceremony that he expected Sebelius “to hit the ground running, and I have every confidence that given her experience as a governor who’s managed crises before, who’s worked on public health issues since she’s been in public life, she is the right person at the right time for the job.”

Kansas Sen. Sam Brownback, who is Catholic, expressed support for Sebelius’ nomination in a March 2 joint statement with Kansas Sen. Pat Robertson. The two senators congratulated Sebelius for her nomination to the post and called it an honor for Kansas to have an elected official appointed to the president’s Cabinet.

The two Kansas Republicans were among nine Republican senators who voted in favor of Sebelius.

In a 2006 talk, Sebelius said her Catholic faith teaches her that all life is sacred and she believes abortion is wrong but she also said she disagreed “with the suggestion that criminalizing women and their doctors is an effective means of achieving the goal of reducing the number of abortions in our nation.”

In a column for the March 6 issue of the archdiocesan newspaper, The Leaven, Archbishop Naumann said Sebelius “represents well Catholic social teaching” on some important issues but not on abortion or embryonic stem-cell research.

“With her history of support for legalized abortion and embryonic stem-cell research, it is troubling the important influence that she will have on shaping health care policies for our nation,” he wrote.

The archbishop called Sebelius “a very bright and gifted leader” who has advocated for low-income housing, health care for poor children and adoption incentives. But he said her abortion position made her nomination “particularly troubling.”