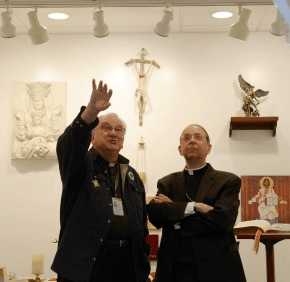 By Paul McMullen
pmcmullen@CatholicReview.org
Twitter: @ReviewMcMullen
DUNDALK – “Hospitality is one of the major themes in the Bible,” said Monsignor John L. FitzGerald as he conducted a tour of the Apostleship of the Sea’s headquarters.
“And,” Archbishop William E. Lori echoed, “it’s one of the major themes of Pope Francis.”
On a day that was to conclude with his leading a high-profile prayer service for peace in Baltimore, Archbishop William E. Lori made time April 25 to visit the Stella Maris International Seafarer’s Center, across from St. Rita Parish on Dunmanway, to learn more about the all-volunteer outreach.
Monsignor Fitzgerald is executive director and chaplain of the Apostleship of the Sea. It is sponsored by the Pontifical Council for the Pastoral Care of Migrants and Itinerant People, and reliant on the support of groups such as the Knights of Columbus and Catholic Daughters of the Americas, parishes such as St. Francis of Assisi in Fulton, and individual volunteers.
Among others, Archbishop Lori met Andy Middleton, director of operations; Dot Acosta, administrative assistant, and Anne Kimball, a parishioner of Ss. Philip and James in Baltimore who is in charge of that hospitality. All, it’s worth repeating, are volunteers.

Here, a visiting seaman from Argentina or the Philippines or Turkmenistan, working on a ship sailing under a foreign flag, might have a few hours to spare while in the Port of Baltimore.
The Apostleship of the Sea provides them van transportation to its Seafarer’s Center, where four computer kiosks with Skype help visitors alleviate some of the isolation which contributes to their trade having the highest suicide rate of any in the world.
“There is a lot of depression among seafarers,” Monsignor FitzGerald said, “and a lot of men saying ‘my job is more important than my family.’ Plus, for those who grew up with no concept of parish life, for most of them, we’re it.”
In addition to the “Aft Deck Patio,” where visitors can light up a smoke, the Seafarer’s Center includes a chapel. A “non-proselytizing” outreach, it distributes two kinds of bags to visitors. Both the white and blue bags contain toiletries and new T-shirts. In addition, the blue bags contain Bibles, rosaries and other Catholic materials.
“We do not apologize,” Monsignor Fitzgerald said, “for being Catholic.”
Archbishop Lori heard Middleton tell of driving a Mormon to a temple on 33rd Street, and of curious Muslims.
“They will take the (Catholic) pamphlets, but be careful to discard them before returning home,” Monsignor FitzGerald said. “I’m probably the first priest some of them have seen.”
He told of families being united at the Seafarer’s Center.
“What a great reunion,” Archbishop Lori said.
According to the Port of Baltimore, it ranked 11th among 36 United States ports in handling foreign tonnage in 2012, a status that figures to rise in the coming years.
“As the Port of Baltimore grows,” Archbishop Lori said, “the importance of this ministry grows. The Lord sends us forth all over the world to proclaim the Gospel. This is one of the ministries where that happens quite literally.”

Story updated 4/26/16 with correct link to the Apostleship of the Sea homepage.