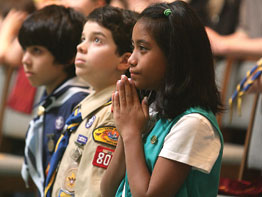 Referring to the Gospel story of Jesus putting mud on the eyes of a blind man, Bishop Madden urged Scouts to “not be blind to what the Lord is asking.” He noted that as Samuel taught, “God does not see things as men see things – God sees to the heart of the matter.”

“Blindness takes many forms in life,” Bishop Madden said. “The real blindness that had veiled his eyes was lifted, but he was given a greater sight that allowed him to see the one standing before him.”

He told the Scouts that “spiritual blindness occurs when God is not part of our lives.” When that happens, he said, it’s hard to do the right things and make the right decisions.

“When God is in our life we are open to life … It’s easier then to see what God has in store for us. Jesus may be calling you to work through your Scouting efforts to get to know him better,” Bishop Madden said. “He may be calling you to serve the church as many of you do as altar servers.”

The Mass concluded with Rabbi Rachmiel Tobesman presenting Cardinal Keeler with the Scouting award. The rabbi joked that when the Jewish scouting group first discussed presenting the award to Cardinal Keeler, “several members of my committee said, ‘That’s not kosher.’”

He then recited a story about rabbinical students seeking the Messiah who were so concerned with keeping kosher that they spoke rudely to a beggar who approached them as they were eating. They refused to wish him peace or give him any food. The beggar said to the scholars, “You’re so very careful about what goes in your mouth, you should be equally careful that what comes out is kosher.” When the men returned to their rabbi, complaining they were unable to find the Messiah, the rabbi told them the beggar was the Messiah, and had they wished him peace and shared a meal with him there would have been peace in the world and no more hunger.

In honoring Cardinal Keeler, Rabbi Tobesman said, “We have more in common than we have differences” and praised the cardinal for his work bringing together Scouts of different faiths.

“I am enormously grateful for this award, and I will treasure it and try to live up to the hope that was addressed by the rabbi – that we will have peace,” Cardinal Keeler said.

For the Scouts themselves, Scouting offers an opportunity to have fun with their friends while making a difference.

Chris Di Fatta, a junior at Calvert Hall College High School, Towson, said he started Scouting in the first grade and is now working on obtaining the rank of Eagle Scout. He has enjoyed going to Sea Base in Florida, where he spent a week scuba diving, and to the National Jamboree. The best part, he said, “is just the bonds, the fellowship. I’ve made a lot of friends.”

Jordan Richard, a sixth-grade student at Fallston Middle School and a junior Girl Scout, said Scouting is fun and she enjoys doing activities with her friends. “When you achieve awards you feel like you’ve really achieved something,” she said. “You can help people and even change their lives.”