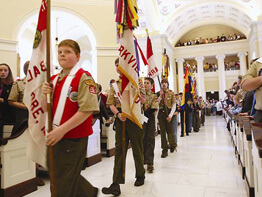 More than 600 Scouts, parents, troop leaders and family members attended the 61st annual Archdiocesan Scout Mass March 4 at the Basilica of the National Shrine of the Assumption of the Blessed Virgin Mary, Baltimore.

This was the third time Michael Shindledecker, 13, from Pack 801, St. Mark, Fallston, has participated in the Scout Mass.

“My dad was a Scout, and he said it was an enjoyable experience,” said Michael who has been in the Scouts for about four years now. “I’ve made new friends and life values.”

Michael said he is looking forward to becoming an Eagle Scout. At the moment he is a first class Scout and has recently earned his first aid badge.

“The Scouts teach you values that are important to life, and they teach you to have fun,” said the eager patrol leader.

Michael, along with many other participants, was excited to see the newly restored basilica and celebrate Mass with Cardinal William H. Keeler. The Mass was concelebrated by Monsignor Thomas Phillips, pastor of St. Gabriel in Woodlawn and archdiocesan chaplain for Scouts, and Monsignor John Brady, Region 4 Chaplain and a member of the National Catholic Committee on Scouting.

“This is quite a gathering,” said Cardinal Keeler with a smile as he looked out into the crowd of people. “He (Jesus) wants to give us the strength to be the best Catholics we can be.”

Cardinal Keeler, an Eagle Scout, encouraged the young people to listen to God’s call because some of them may be called to the priesthood or religious life. We need to prepare our hearts for Jesus, said Cardinal Keeler.

A special patch was designed for the occasion and given to Cardinal Keeler as a gift from the Scouts.

“Scouting is a wonderful way of preparing our lives in faith,” said Cardinal Keeler.