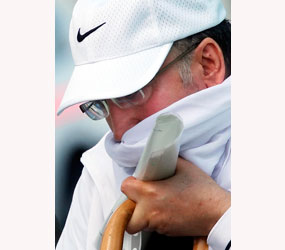 LONDON – A Scottish priest who served at Lockerbie, Scotland, at the time an airliner was blown from the sky by terrorists has welcomed the release from jail of the only person convicted of the attack.

Megrahi was jailed in 2002 for a minimum of 27 years for the Dec. 21, 1988, bombing of Pan Am Flight 103 over the Scottish town. It was the worst terrorist attack in British history and killed 270 people, including 189 Americans and 11 people on the ground.

But Megrahi was released by the Scottish government on compassionate grounds after physicians confirmed his prostate cancer was at an advanced stage and he had only months to live. He returned to Libya Aug. 20.

The decision, authorized by Justice Secretary Kenny MacAskill, has angered relatives of the victims and was described as a “mistake” by U.S. President Barack Obama.

But Father Keegans, a priest of the Diocese of Galloway, told Catholic News Service in an Aug. 20 telephone interview that he had visited Megrahi in prison and now believed an “innocent man has gone home from Scotland.”

“I am very pleased that the Scottish government has agreed to release Megrahi on compassionate grounds,” said Father Keegans, a parish priest in Lockerbie at the time of the disaster and now the administrator of St. Margaret’s Cathedral in Ayr, Scotland.

“He is a dying man and the best way to deal with him is in a true and proper fashion as a human being and let him die at home with his family and friends,” he said.

Father Keegans said he befriended many families of the American victims and had presided over the marriage of Kara Weipz of Mount Laurel, N.J., whose 20-year-old brother, Richard Monetti, was a Syracuse University student on board the flight.

“I have been in contact with American families ever since the disaster happened and I admire them very much,” Father Keegans said.

Father Keegans, 63, visited Megrahi in prison days after returning from a Lockerbie memorial event in the U.S. in December 2008.

“After speaking with him I was more convinced than ever of his innocence,” he said. “He spoke about his trial, how the trial had gone and how a U.N. official observer had said to him three days before the verdict that he was going home. Imagine how he felt when he was convicted.

“He spoke of his respect for Christianity and how he read the Bible every day and the Quran every day. He spoke of his desire to clear his name. He said, ‘I want the tag of the Lockerbie bomber to be removed; I want to clear my name.’“

Megrahi, 57, lost his first appeal against conviction and launched a second appeal after a 2007 review of his case by the Scottish Criminal Cases Review Commission found that there might have been a miscarriage of justice.

In a statement issued Aug. 20, Megrahi maintained his innocence but said he dropped his appeal after he was “faced with an appalling choice: to risk dying in prison in the hope that my name is cleared posthumously or to return home still carrying the weight of the guilty verdict, which will never now be lifted.”

Father Keegans told CNS that he believed Megrahi’s decision to drop his appeal meant that the truth about Lockerbie might never be established.

Peter Kearney, spokesman for Cardinal Keith O’Brien of St. Andrews and Edinburgh, Scotland, told CNS Aug. 20 that “the (Scottish) bishops’ conference has not taken a position” on the release of Megrahi and “no bishop has released a statement on the matter.”