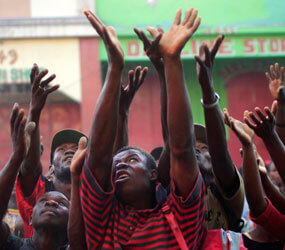 School communities around the Archdiocese of Baltimore have been moved to act in the wake of the devastating Haitian earthquake.

Mount St. Joseph High School in Irvington held a day-long vigil in its chapel Jan. 15 and also allowed students to dress out of their normal uniforms for a fee. They were encouraged to give as much as possible and the proceeds went to Xaverian Brothers international headquarters to provide relief for the country.

The order, which sponsors Mount St. Joseph, has had a presence in Haiti for the last 20 years.

Brother James M. Kelly, the school’s president, wrote a letter to the families of students telling them of the community’s plans.

A typical dress-down day at the school will result in $1,000. The Jan. 14 event raised $13,000. That money will go toward a total collection number from the 13 U.S. schools sponsored by the Xaverians.

“I was overwhelmed,” Brother Kelly said.

Families, students and faculty all contributed to the fund. One parent, Brother Kelly said, sent a check for $500. The Haitian crisis was personal for the Xaverian brothers, as two of them were in Haiti during the earthquake. Brother Michael McCarthy was a member of the school board for nine years. He and another Xaverian were unharmed.

Last year, principal Barry Fitzpatrick traveled with five students to Haiti and met orphans there. They saw unbelievable poverty, according to Brother Kelly, and pure joy as well.

“They aren’t defeated by their poverty,” Brother Kelly said.

Mount St. Joseph was planning on sending another five students in the spring, but Brother Kelly believes the recent tragedy might make traveling to Haiti difficult.

The Xaverians sponsor and financially support a residence for college students in the heart of Port-au-Prince, in a neighborhood that was completely devastated. Those students have been heard from and are well, Brother Kelly said.

At Towson’s Calvert Hall College High School, more than $2,000 was raised for Haitian relief at the cafeteria cash registers during two days. The school’s band raised more than $1,500 in two days as well. A school representative said Calvert Hall would be sending Catholic Relief Services a check for $3,500.

A news release from the school said daily community prayer included intercessions for the people of Haiti, the families of those missing and dead and for those workers and volunteers providing relief.

A Ravens “tag day” on Jan. 22 will require students to give $1 to be out of uniform and the proceeds will go to Haiti. Faculty advisor Terri Archibald said, “IHM students love the Ravens, and they get to help those in need at the same time.”

Emmitsburg’s Mother Seton School is using two different avenues to help those in Haiti. Sister Joanne Goecke, the school’s principal and a Daughter of Charity, encouraged families to give to her order’s work in Haiti after its provincial house was destroyed there. In addition, a school newsletter said proceeds from an upcoming basketball game, along with other contributions, would be forwarded by the Daughters of Charity Provincial House to the order and its ministries in Haiti.

At Monsignor Slade Catholic School in Glen Burnie, middle school students decided to take up a collection during Catholic Schools Week to help with the disaster relief. National Junior Honor Society students planned on selling wristbands and donating the money to the Haitian relief efforts.

Elkridge’s St. Augustine School community started a “Hearts for Haiti” relief fund. Students were asked to perform chores or other helpful acts to earn money to contribute to fund. Paper hearts were going to be placed in each classroom with names of students and what kind act they performed to earn money.

Resurrection-St. Paul School started the “Quarters for Quake Victims” collection, which will last through Jan. 29. All students have been invited to bring in at least a dollar in loose change and drop it into one of the three locations in the school’s main foyer.

Older students at the school participated in a prayer vigil as well.

In a letter to families, principal Karen Murphy wrote: “The one thing we told students … is that prayer is our most valuable asset.”

Samantha Russell, a 2009 graduate of Mount St. Mary’s University in Emmitsburg, recently traveled to work in Haiti with the organization The Haitian Project. According to a university spokesperson, Russell’s family told the school that she was unharmed and had slept in a soccer stadium the first night after the earthquake. At the time of the tremors, she was estimated to be about 60 miles from the epicenter.

Baltimore’s Loyola University Maryland celebrated a Mass dedicated to the victims of the earthquake Jan. 14 at the school’s Alumni Memorial Chapel. A collection for the victims was taken at the Mass.