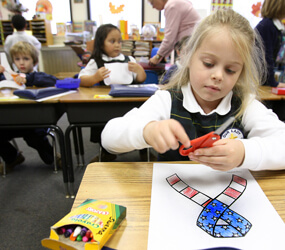 Around the Archdiocese of Baltimore, students showed their support for veterans by participating in various celebrations and activities Nov. 11.

Brooklyn’s St. Rose of Lima School students and staff gathered for a prayer service at the church to pay tribute. The service included a moving ceremony to remember those who have died, while living veterans from various armed forces were honored and given cards of appreciation.

The school community held flags honoring current and former military members during the ceremony and students later packed gift boxes for those serving.

“We want (students) to be aware of their brothers and sisters, like Jesus Christ, who paid the ultimate sacrifice for us,” principal Madeleine Hobik said.

Students learned that the freedom of religion was earned by those who have served the country. Families were encouraged to provide names of veterans or those in active service to be honored. Donations were made in the service person’s name and care packages were sent to soldiers overseas.

Middle school students from St. Katharine School in Baltimore watched, with parent permission, segments from the HBO World War II series, Band of Brothers. They also wrote letters of thanks to those receiving care at a local veteran affairs hospital. Primary grades wrote letters to men and women in the military by using a Web site called, Let’s Say Thanks.

“Many of them have had parents and family members serve already,” principal Angela Calamari said. “Some have family members who are serving now, and we pray for them.”

Fourth graders there prepared a package for Charles Peterson, who is stationed in Afghanistan. The package included some of his favorite car magazines, treats, pictures, letters and a banner that thanked him.

The entire school prayed three Hail Mary’s, which will be incorporated in a spiritual bouquet for the military at Fort Hood. The base was the site of a recent shooting massacre.

The Essex community surrounding Our Lady of Mount Carmel Elementary School is home for many military members and veterans.

The student body participates in Operation Welcome Home throughout the year. Students made cards to be given to military members who pass through Baltimore/Washington International Thurgood Marshall Airport on their way home from a tour of duty. The veterans are given goody bags and cards by Operation Welcome Home volunteers.

Meanwhile, fourth and fifth-graders worked on an activity that allowed them to virtually visit the Vietnam War Memorial.

Master Sergeant Paul Blitz, from the 200th Military Police Command at Fort Meade was a highlight of the week, talking to students about his experiences in Iraq as he showed them his sleeping bag and combat gear.

“It’s hard for a child to understand,” Shipley said. “When they can see a picture of someone, it makes things more meaningful for them.”