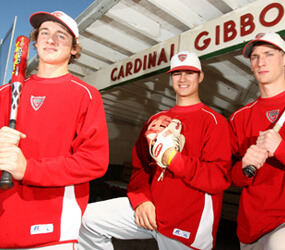 One week before the start of this baseball season, Matt Foster received gut-punching news. The first-year coach of Cardinal Gibbons High School, where he was a 2001 graduate, learned that the Archdiocese of Baltimore would close the institution in June for financial reasons.

He organized a team meeting, addressing a group that came within an eyelash of beating Calvert Hall for the 2009 Maryland Interscholastic Athletic Association A Conference title.

Shortstop Eric Drechsler said that players looked at each other and said, “This is the last time. Let’s go out and get it done.”

Baseball is more than a sport at Gibbons.

As a freshman, Foster was reminded that he walked in the footsteps of the legendary George Herman “Babe” Ruth, arguably the greatest player ever. A century ago, Ruth played for St. Mary’s Industrial School, on the grounds where Gibbons opened in 1962, hence its reference as “The House That Built Ruth.”

“You don’t want to go to the same school as Babe Ruth,” Drechsler said, “and stink at baseball. It would be embarrassing.”

“We play not only for the guys with us,” Foster said, “but the guys who played before us.”

Gibbons and its 11 seniors held on for an 8-4 win over Loyola Blakefield April 28, remaining in solid playoff contention in the A Conference. The Crusaders did not play like a team carrying history on its shoulders.

A time of uncertainty

“We feel like we have the prettiest natural park in the league,” Foster said. “It’s hard to let this go.”

Crowds at Babe Ruth Field, with its cavernous dimensions, have been as strong as always along the first-base side. Parents grill hamburgers, sell sodas, keep score and cheered on the team. Something has been missing, however, in what pitcher Chris Peltz dubbed “the last crusade.”

“It’s unusual,” parent Tom DiVincenzo said. “Last year was a jam-packed event, a positive emotion. This year can be ho-hum, not so much because of the way the team is playing, but just because of everything that is going on.”

He said baseball was therapeutic.

“We’re not trying to do the unbelievable, we’re just trying to win every game and get better,” said centerfielder Dominic Fratantuono.

Seniors Peltz, Drechsler and right fielder Frank DiVincenzo played in the same Arbutus Little League and grew up as friends at Ascension School in Halethorpe. Like Gibbons, it too is closing.

“When you’re attending the schools, and you’re in eighth grade or senior year, you want to get out,” Frank DiVincenzo said. “Now, you don’t have anything to come back to. I feel bad for the teachers and the younger kids.”

The friends don’t need to say anything when something’s wrong. They just know.

“We lean on each other a lot,” Peltz said.

On Senior Day, a program typically salutes graduating players. On May 5, all Gibbons players were scheduled to play their final regular-season game at Babe Ruth Field.

The Crusaders want to extend the season as long as possible. They’d like to win the A Conference championship and add one final note to a proud baseball legacy.

With a gleam in his eye, Drechsler said: “It’s coming.”