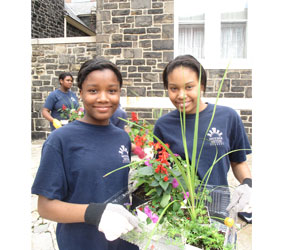 Mother Seton School students scattered containers of vinca, impatiens, spikes and geraniums in a colorful array near the intersection of Greenmount Avenue and 22nd Street May 19 as they scurried to fill flower pots in front of homes.

For many in School Sister of Notre Dame Marianne Roderick’s sixth-grade girls’ science class, this was the first time they had engaged in such a project.

“It was so fun and we learned about a whole bunch of plants, like spikes, and the flowers were very colorful,” said Tyronsha’ Harris, who joined classmates Lamya Harvey and Skye Mills in filling pots.

School Sister of Notre Dame Jeanne Barasha, who organized the project, seemed as bright and cheerful as the flowers she helped distribute as she bustled about offering additional potting soil and planting instructions to students.

The nun explained that in the past, St. Ann parishioners had helped plant the assortment of flowers donated by Sacred Heart of Glyndon Church and School, with whom they share a sister parish relationship. This year, students took to the soil, adding color to the previously weed-filled pots along the sidewalk.

“We’ve been trying to plan ways for students to be more involved with the community near the school,” said School Sister of Notre Dame Charmaine Krohe, president of the co-educational school, which is completing its second year at the former St. Ann School.

Sister Marianne, whose family owns a farmer in Walkersville, has been teaching students about metamorphosis, photosynthesis and more in science class.

“This was more like a service project,” said Sister Marianne. “Some people (from the neighborhood) have already talked to them, so it’s opened them up to the community.”

One man, who had a fresh pot of flowers in front of his home, popped his head out to offer some free chess sets to the school.

Shetia Ogle has helped her grandmother plant flowers in Hampden and said she liked the project because she enjoys being active.

“We enjoyed our time,” said Skye, while Lamya piped up, “We want to do it again next year.”