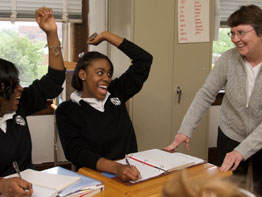 At a time when a rising tide of secularism threatened the church’s existence in Germany, a young Bavarian woman took a stand for her faith that would touch the lives of millions throughout the world for 175 years.

Caroline Gerhardinger, daughter of a wealthy shipmaster, founded the School Sisters of Notre Dame in Bavaria on Oct. 24, 1833 – taking the religious name of Mother Theresa of Jesus.

Established in the wake of the Napoleonic Wars with a special focus on educating poor girls, the order quickly attracted new members throughout Germany and across the globe.

The School Sisters are very active in the Archdiocese of Baltimore, serving at the College of Notre Dame of Maryland, the Institute of Notre Dame, Notre Dame Preparatory School in Towson, the Caroline Center, Marian House, Villa Assumpta, Mother Seton Academy and Sisters Academy of Baltimore.

As the sisters celebrate their jubilee, they remember their predecessors as pioneers who served as models of faith and courage. They are also renewing their commitment to ministry.

“We have a very strong belief that education is transformative,” said Sister Kathleen Cornell, S.S.N.D., leader of her order’s Baltimore-based Atlantic-Midwest Province. “We have always believed that we can change the world through education.”

A hallmark of her order that goes all the way to its earliest days is its international character, Sister Kathleen said.

“In a culture that tends to be individualistic, competitive and focused on affluence, we have been a community committed to collaboration,” she said, calling unity another key part of the School Sisters’ identity.

The sisters collaborate closely with lay associates, Sister Kathleen said, and their ministries encompass everything from teaching to social work and social justice.

Baltimore holds a significant place in the School Sisters’ storied history. Mother Theresa of Jesus had planned to launch a ministry to German immigrants in Pennsylvania, traveling across the Atlantic with five other sisters in 1847 to begin the effort. Because the local bishop had not invited them, however, the sisters were told to return to Germany as soon as they landed.

St. John Neumann, who was then based in Baltimore as the provincial superior of the Redemptorists, intervened with the Baltimore archbishop, who allowed the sisters to take over three German schools in Redemptorist parishes in Baltimore.

Mother Theresa of Jesus, who returned to Germany after two years, entrusted her order’s American mission to 23-year-old Mother Caroline Friess, who saw its ministries spread throughout the young nation.

“She (Mother Caroline) traveled up and down the Mississippi and into Canada establishing Catholic schools and orphanages” said Sister Dorothy Daiger, S.S.N.D., librarian at Sisters Academy and a member of her order’s heritage committee. “They were very heroic women.”

The early sisters provided the model for working and living with the poor, Sister Dorothy said – a legacy that continues in the School Sisters’ ministry today.