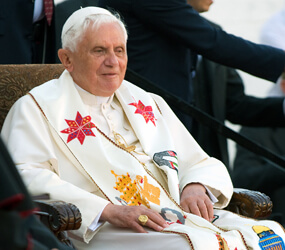 BETHLEHEM, West Bank – Sometimes a scarf is worth a thousand words.

Pope Benedict XVI spoke carefully during his Holy Land pilgrimage in May – so carefully that it occasionally seemed his talks were written by Vatican diplomats.

But the image and the message people will carry from his visit may have more to do with scarves than speeches.

In Bethlehem, during a long evening event at the Aida Refugee Camp, the pope expressed sympathy for the suffering of families who have been divided and uprooted since the 1948 war that established the country of Israel and dispossessed many Palestinians of their homes.

However, he carefully avoided direct comments on the right of return, the principle that Palestinian refugees have a right to regain possession of their ancestral homes. The issue is an explosive and difficult one in peace talks, in part because of the practical difficulties involved.

The Vatican has generally steered clear of the issue in recent years, though church officials have suggested on occasion that some form of compensation for those who lost homes might be a fair settlement.

But at the Aida camp, ringed by banners reading “No justice without return home,” the sentiment was decidedly more uncompromising.

When the event drew to a close, Palestinian officials announced they had a special gift for the pontiff: a “scarf of return,” designed and embroidered by Palestinian artists.

Lest anyone miss the point, the scarf was full of symbols:

– The “key of return,” symbolizing the keys many Palestinians still keep to their old homes.

– The papal keys, implying the pope had the moral authority to make a difference on the issue in the international arena.

– Images of the Star of Bethlehem, the Dome of the Rock and the Church of the Nativity, “to express the unity of the Palestinian people and Jerusalem as the capital of Palestine.”

While Vatican diplomats would have winced at a papal endorsement of all those concepts, the pope had no problem accepting the gift. As he stood up and smiled broadly, a Palestinian placed the scarf around his shoulders, and he wore it during the rest of the program.

The moment drew some of the loudest cheers of the evening.

The pope had an earlier scarf experience in Jordan, where he was presented by Melkite Catholics with a kaffiyeh, also known in Jordan as a “shmagh,” the red-and-white-checked head scarf that in some parts of the Mideast is associated with Hamas and other militant groups.

The photo of the pope in the “shmagh” landed on the front pages of Jordanian newspapers the next day. A few days later, children greeting the pope at the Latin patriarchate school in Bethlehem already had that picture on their T-shirts.