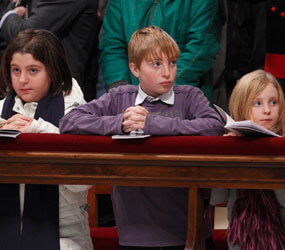 VATICAN CITY – Christ, the king of the world, is not found on the thrones of power or in the hallways of learning, he is found defenseless among the poor and humble, Pope Benedict XVI said.

“At times, power – including that of knowledge – blocks the path to encountering that child,” the Son of God, the savior of the world, he said.

“God does not manifest himself in the power of this world, but in the humility of his love, that love that asks us, in our freedom, to welcome it so that we may be transformed,” he said.

The pope made his remarks at a Mass in St. Peter’s Basilica Jan. 6, the feast of the Epiphany.

In his homily, the pope highlighted the journey of the Wise Men or Magi who were in search of something more – for “the true light that would be able to indicate the path to follow in life.”

Following the star, the Magi met King Herod in Jerusalem. Herod, a man of power, considered Jesus, the promised king of the Jews, to be a rival and wanted to kill him.

Even today, God can seem like “a particularly dangerous rival who would want to deprive people of their personal space, of their autonomy and their power,” the pope said.

“We have to ask ourselves, is there perhaps a little bit of Herod in us as well? Perhaps we, too, sometimes see God as a kind of rival” who needs to be removed so we could have unlimited power to do whatever we want, the pope said.

However, letting God into one’s life “does not take anything away and does not threaten anything; rather he is the only one capable of offering us the possibility of living to the full and feeling real joy,” he said.

In Jerusalem, a city of power and learning, the Magi met with scribes and theologians for guidance, he said. But the Jerusalem-based scholars did not embark on the journey to seek out the Christ child, preferring instead to stay put and continue to study, examine and discuss the Scriptures.

“Again we can ask ourselves, is there not also in us the temptation to see the sacred Scriptures – this extremely rich and vital treasure for the faith of the church – more like something for specialists to study and discuss rather than like the book that indicates the path to take in life?” the pope asked.

In the end, the star brought the Magi to the small town of Bethlehem and “led them among the poor, the humble in order to find the king of the world,” said the pope.

The Magi, like many people today, had expected to find the savior of the world “in places of power and culture,” he said.

Many would imagine that if God was coming to save the world, he would have displayed his might by “giving the world a more just economic system in which everyone could have everything he or she wanted,” the pope said.

Yet that kind of power would have been “a kind of violation of humankind because it would have deprived people of the fundamental elements” of being human, he said, such as their free will and capacity to love.

God wants people to exercise their freedom and love, and so he comes as a child and displays not earthly power, but “the apparent helplessness of his love.”

After the Mass, Pope Benedict gave his noonday Angelus address from his studio window to thousands of people gathered in St. Peter’s Square. The Epiphany, a national holiday in Italy, is largely dedicated to children, and the square was full of young people.

The pope said everyone is called to be like the star of Bethlehem and lead others to Jesus with his light. Christians “must shine like children of the light, to attract everyone to the beauty of the kingdom of God,” he said.

On the eve of the Epiphany, the pope visited children in Rome’s Gemelli hospital “to be a little like the Magi,” he told them.

The pope brought stuffed animals, music boxes, books and candy for the children, many of whom were receiving care for the birth defect spina bifida.

The pope greeted and blessed the children, and they gave him small statues of the three kings and drawings they had made for the occasion.