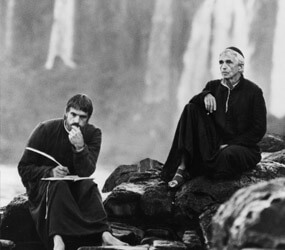 NEW YORK – From Hollywood’s silent era to today’s summer blockbusters, Catholic priests have been a staple of the silver screen.

In 1915, D.W. Griffith followed up his controversial silent classic “Birth of a Nation” with the ambitious epic “Intolerance,” which prominently featured a Catholic priest administering last rites to a condemned man. Five years later, Bert Bracken would direct “The Confession,” about a priest bound by the seal of confession to keep secret information that could save an innocent man from the gallows. A similar plot device would be employed by Alfred Hitchcock in “I Confess” (1953), starring Montgomery Clift.

From Bing Crosby’s crooning curate in “Going My Way” (1944) to Karl Malden’s dockyard preacher in “On the Waterfront” (1954) to Max Von Sydow’s demon-battling Jesuit in “The Exorcist” (1973), men of the cloth have provided some memorable moments in the history of cinema. The same goes for foreign films. Just think of Don Pietro martyred by the Gestapo in Roberto Rossellini’s neorealist masterpiece “Open City” (1941).

What makes Catholic priests such compelling character studies? Perhaps part of it has to do with the nature of movies themselves. Film is an inherently visual art form, telling stories and conveying meaning through images rather than words. A Roman collar is one of those archetypal wardrobe pieces that communicate volumes before the character wearing it ever utters a line of dialogue. Just as the cowboy hat signals grit, or the detective’s fedora hard-boiled toughness, so the priest’s collar serves as visual shorthand for morality, albeit at times flawed or distorted.

Or perhaps it has something to do with the priest’s traditionally understood role in society: that of intermediary between God and man.

Despite the intellectually narrowing effect of the prevailing cultural secularism, the priest is one of the few symbols still wide enough to embody “big” concepts such as good and evil, sin and grace, damnation and salvation.

Whatever the fascination, priests occupy a special place in the catalog of film characters, one that spans every era and genre. Obviously, the image of Catholic priests in popular culture has changed over the years, in sync with the zeitgeist of the day.

During its heyday in the 1930s and ‘40s, Hollywood populated rectories with brand-name stars such as Crosby, Spencer Tracy, Frank Sinatra and Pat O’Brien, putting a confident, red-blooded face on American Catholicism.

“As heroes of the silver screen, priests and nuns were ambassadors of Christendom,” said Catholic film critic Steven D. Greydanus.

In the 1960s and ‘70s, priests lost their sacred cow status, both in society and at the movies.

“Priests weren’t protected species anymore,” said Jesuit Father Mark Massa of Fordham University, adding that for filmmakers, “priests became places where conflicts could be worked out in a human way.”

The spiritually self-assured Father O’Malleys and Father Flanagans were excommunicated from movie theaters, and a new breed of box-office priests were ordained – the tortured and conflicted (generally over celibacy) clerics in films such as “Mass Appeal” (1984), “The Thorn Birds” (1983) and “Monsignor” (1982).

In truth, despite criticism of being unrealistic and sentimental, many films from the 1930s and ‘40s reveal just as much emotional honesty as their more contemporary counterparts – only without the latter’s usual dose of dissent.

For example, Gregory Peck’s missionary in “The Keys of the Kingdom” (1944) is plagued with inner turmoil, at one point confessing, “When I was a little boy, I imagined (priests) were all infallibly perfect.” To which his kindly mentor responds, “And now you’ve discovered how frighteningly human we are.” Or, as Alec Guinness’ politically imprisoned prelate bluntly puts it in “The Prisoner” (1955), “Do not judge the priesthood by the priest.”

In his scathing 1993 “Hollywood vs. America,” conservative film critic Michael Medved expresses the opinion that the modern Hollywood view of priests is “every bit as one-sided in its cynicism and hostility, as the old treatment may have been idealized and saccharine.”

It’s a hard point to argue given such unflattering depictions in films such as “Priest” (1994), “The Magdalene Sisters” (2002) and “The Da Vinci Code” (2006) – where priests are portrayed, respectively, as dysfunctional, sadistic and sexually predatory, and murderously sinister.

However, others caution against tarring the entire industry with the same anti-clerical brush.

“I do not think there is an anti-clerical conspiracy in the film industry,” said Monsignor George Deas, a retired priest of the Brooklyn Diocese. “When it occurs, as in ‘El Crimen del Padre Amaro,’ it is intentional, explicit and specific.”

While acknowledging “excessive and unwarranted bitterness and animosity” on the part of some filmmakers, Greydanus noted, “not all these knocks are unwarranted or unfair; scandal, mismanagement and other failings within the church have always been subjects of legitimate criticism.”

Modern Hollywood is hardly without sin, but it is also responsible for some powerful and profoundly reverent depictions of priests – Clint Eastwood’s “Gran Torino” (2008), to name but one.

Many of the movies on the accompanying list offer compelling illustrations of the heroic witness called for by Archbishop Fulton Sheen when, writing on the priesthood, he said, “We become significant to our fellow men not by being a ‘regular guy’ but by being ‘another Christ.’“

From its opening image of Henry Fonda’s shadow, arms outstretched cruciform, no movie captures the idea of priest as “alter Christus” better than “The Fugitive” (1947) by Catholic director John Ford – said to be his favorite film – and loosely based on Graham Greene’s novel “The Power and the Glory.” In it, Fonda’s hunted priest admits, “The priesthood is large, it’s tremendous; I was always too small for it.”

In the final analysis, so too is perhaps even the biggest movie screen.

DiCerto is a former film critic for the U.S. Conference of Catholic Bishops’ Office for Film & Broadcasting.