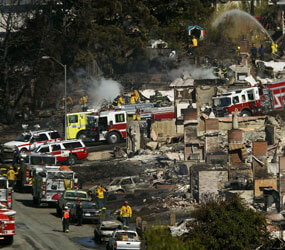 That evening, the eighth-grader was gone, killed along with her mother, Jacqueline, in a deadly fire caused by natural gas pipeline explosion that destroyed their home and dozens of others in San Bruno.

They were two of the four people killed in the inferno.

Janessa’s father, James, and the Greigs’ older daughter, Gabriela, a high school junior, were at a tennis match at the time at St. Ignatius College Preparatory. They stayed for back-to-school night.

Janessa came home so she could work on her schoolwork, and her mother was home from her job, said Holy Names Sister Marilyn Miller, St. Cecilia’s principal.

“So they were home together,” she said.

Janessa, who attended St. Cecilia for nine years, was the eighth-grader whom all the other students saw every day on closed-circuit TV giving the day’s announcements. Sister Marilyn finds it hard to believe she is gone.

“She always had a smile on her face,” Sister Marilyn said. “She was someone who was very warm, outgoing and generous, respected by all the kids.”

“Jesus is alive in the world. Jesus is going to give us our light today,” the priest said. “We cannot understand how or why this happened, but we do know that Janessa and Jacqui Greig are with you. This is our faith. That’s why we are here; we are friends, friends in Jesus.”

“The pronoun she used always was ‘we,’“ he said later in an interview with Catholic San Francisco, the archdiocesan newspaper.

Jacqueline Greig, 44, was on the pastoral council, serving her third year in the volunteer position as secretary. James Greig had served on the council before her. The family sat together weekly at 9:30 a.m. Mass.

“There was a hole on Sunday,” said Mother’s Club president Sally Holper, whose family often sat behind the Greigs.

Jacqueline Macedo Greig was quiet and effective on the pastoral council because “she really listened to people,” Monsignor Harriman said.

“She had a beautiful smile,” he said. “She was a beautiful, unassuming woman. She was there when you needed her.”

Jacqueline worked full time but made time for school activities, recently helping with the Mexican food booth at the school multicultural day in the spring, serving nachos with her father. Her focus was on her children, Janessa and Gabriela.

“Wherever her girls were, she was there,” Sister Marilyn said.

In the drama club, Janessa played Aladdin as a sixth-grader in the school musical, danced ballet and took singing and art lessons. Holper said Janessa had a half-finished self-portrait at the art studio where Janessa and Holper’s daughter Charlotte studied drawing together.

The school Mass where Janessa gave the introduction was originally scheduled for a Friday, Sept. 10. But, at the beginning of the week, Monsignor Harriman learned that a funeral was scheduled for that day.

In a move that both found providential, he and Sister Marilyn changed the Mass date to Thursday, which would turn out to be Janessa’s last day.

On Sept. 12, the Sunday night after Janessa died, the pastor took out the DVD from last spring’s confirmation, where Janessa was chosen to deliver one of the reflections. He was struck by her mature grasp of her Catholic faith.

“It was striking,” he said, “just striking.”