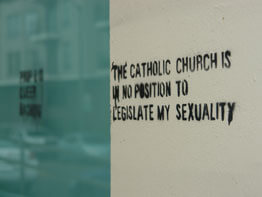 SAN FRANCISCO – Most Holy Redeemer Church in San Francisco and the administrative offices of the Archdiocese of San Francisco were vandalized in early January with graffiti critical of the church’s support of Proposition 8, the California voter initiative that overturned last May’s state Supreme Court ruling declaring that all couples have the right to marry regardless of sexual orientation.

Mayor Gavin Newsom, although a prominent opponent of Proposition 8, condemned the weekend attack on Most Holy Redeemer as “cowardly and criminal.” The San Francisco Police Department assigned the case to its hate crimes unit for investigation.

A Most Holy Redeemer worker arrived at 6:15 a.m. Jan. 4 to find a wall near the entrance to the church defaced with a four-line message spray-painted in black: “Prop H8/Niederauer/Ratzinger/Where is the love?” Swastikas were scrawled on either side of the message.

The references were to Archbishop George H. Niederauer of San Francisco and Pope Benedict XVI, the former Cardinal Joseph Ratzinger.

In a statement Jan. 5, Mayor Newsom strongly condemned the vandalism.

“San Francisco is a city that embraces people of all faiths,” he said. “To intimidate a community and threaten a place of worship is contrary to everything the city of St. Francis represents.”

On the morning of Jan. 5, workers at the archdiocesan chancery building found Proposition 8-related graffiti stenciled on walkways, walls and windows at the building’s main entrance.

On Nov. 21, Star of the Sea Church in San Francisco received a suspicious package that contained batteries and a purple liquid in a plastic bag. No message was included and there was no direct connection to Proposition 8, which at the time had sparked a backlash against religious organizations that supported the initiative.

Chancery officials said Jan. 6 that guidelines suggested by the police for reporting and addressing such crimes were being forwarded to pastors and parish administrators.