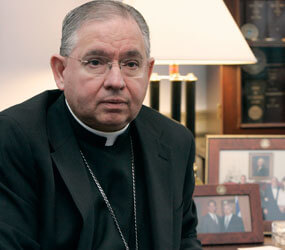 The appointment was announced in Washington April 6 by Archbishop Pietro Sambi, apostolic nuncio to the United States.

Cardinal Roger M. Mahony, who is 74, currently heads the archdiocese. As coadjutor, Archbishop Gomez, 58, automatically becomes head of the archdiocese upon Cardinal Mahony’s retirement or death.

The cardinal will turn 75 next February, the age at which bishops are required by canon law to submit their resignation to the pope.

“I welcome Archbishop Gomez to the Archdiocese of Los Angeles with enthusiasm and personal excitement,” Cardinal Mahony said in a statement. “The auxiliary bishops and I are looking forward to working closely with him over the coming months until he becomes the archbishop early in 2011.”

Archbishop Gomez is currently the highest-ranking prelate of the 27 active Hispanic Catholic bishops in the U.S. When he succeeds Cardinal Mahony, he will become the first Hispanic archbishop of Los Angeles, the nation’s largest archdiocese.

“‘I’m very grateful to the Holy Father for giving me this opportunity to serve the church with a mentor and leader like Cardinal Roger Mahony,” Archbishop Gomez said in a statement. He said he was grateful to Archbishop Sambi “for supporting the Holy Father’s confidence in me. I will try with all my strength to earn that trust.”

A Mass of reception for Archbishop Gomez will be celebrated in Los Angeles May 26.

The archbishop, one of 22 Opus Dei bishops around the world, was installed to head the San Antonio Archdiocese in February 2005. When he was named to Texas in December 2004, then-Bishop Gomez had been an auxiliary bishop of the Denver Archdiocese for about three years.

Jose Horacio Gomez was born in Monterrey, Mexico, Dec. 26, 1951. He attended the National University of Mexico, where he earned a bachelor’s degree in accounting. In college he joined Opus Dei, an institution founded by St. Josemaria Escriva to help people turn their work and daily activities into occasions for growing closer to God, serving others and improving society. Opus Dei became a personal prelature in 1982.

Archbishop Gomez studied theology in Rome and at the University of Navarre in Spain, where he earned a bachelor’s degree in theology and a doctorate in moral theology. He was ordained a priest of Opus Dei Aug. 15, 1978, in Torreciudad, Spain.

After ordination he pursued pastoral work with college and high school students in Spain and Mexico. In 1987, he was sent to what was then the Diocese of Galveston-Houston to minister for Opus Dei in several capacities in Texas. He became a U.S. citizen in 1995.

In 1999, he became the vicar of Opus Dei for the state of Texas. Pope John Paul II named him a Denver auxiliary bishop in January 2001.

Cardinal Mahony has been archbishop of Los Angeles for almost 25 years. Appointed in July 1985, he was installed in September of that year. He was elevated to the College of Cardinals in June 1991.

A year after being named to Los Angeles, then-Archbishop Mahony created five pastoral regions to better minister to the 4.2 million Catholics in the Archdiocese.

He has overseen the construction of one of the largest Catholic churches in the U.S. – the Cathedral of Our Lady of the Angels, which was dedicated Sept. 2, 2002. Shortly after the 1994 Northridge earthquake damaged the Cathedral of St. Vibiana beyond repair, he announced plans to replace it with a new cathedral.

During his tenure, the cardinal has been a national leader in advocating for the U.S. Congress to pass comprehensive immigration reform. He has served as chairman of the bishops’ doctrine committee and currently is consultant to the divine worship, migration and pro-life activities committees.

Born in Hollywood, Calif., Cardinal Mahony is the first native Angeleno and the third archbishop of Los Angeles to made a cardinal. From 1980-85 he was bishop of Stockton, Calif., and prior to that he was an auxiliary bishop of the Diocese of Fresno, Calif.

The Los Angeles Archdiocese covers about 8,800 square miles. It has a total population of 11.6 million; 4.2 million people, or 36 percent, are Catholic.