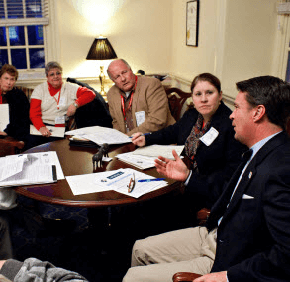 ANNAPOLIS – For more than 10 years Richard C. Gross Sr. and wife Lois Gross have come to Annapolis to lobby their lawmakers on hot-button issues. This year their focus was on same-sex marriage.

“(The House of Delegates voting in favor of) same-sex marriage is the worst thing that’s happened recently,” said Gross, who said he’s “dead set against the decision” that Del. Pamela G. Beidle, an Anne Arundel County Democrat, made Feb. 17 voting ‘yes’ for the same-sex marriage bill in the House.

“It was the wrong decision,” said Gross, 83, a parishioner of Holy Trinity, Glen Burnie.

Nearly 600 Catholics from across Maryland came to Annapolis Feb. 20 for the 28th annual Lobby Night. Lobby Night participants met with their lawmakers to discuss topics including same-sex marriage, abortion and the death penalty, but same-sex marriage received the most attention.

Lobby Night came three days after the House of Delegates voted 72-67 on Gov. Martin O’Malley’s bill to legalize same-sex marriage. The bill needed 71 votes to pass. Maryland would be the eighth state, in addition to the District of Columbia, to allow gay marriage.

Del. Beidle, who met with the Grosses Feb. 20, said she voted in favor of the bill after hearing a personal story of a mother who could not enroll her child in a public charter school because she needed a marriage certificate and a birth certificate with both parents’ names.

“It had to do with my decision,” Beidle said. “Now they can have a marriage certificate.”

The Senate is expected to begin debating on a bill Feb. 23 that would legalize same-sex marriage in the state. The bill cleared the House of Delegates Feb. 17 in a 72-67 vote after needing 71 votes to pass. Maryland would be the eighth state, in addition to the District of Columbia, to allow gay marriage.

Sen. James E. DeGrange Sr., an Anne Arundel County Democrat, who said he will vote against same-sex marriage, said he is concerned because religious organizations are not fully exempt by the House’s same-sex marriage bill.

“It’s always the unintended consequences,” DeGrange said. “I think marriage should be between a man and a woman.”

Bob Derencz, a parishioner of St. Mark, Fallston, said he came to Annapolis because he’s concerned that Catholic lawmakers are only “Catholics by convenience.”

“Civil unions would be fine. Everyone is here because of a man and a woman,” said Derencz, 61, of Fallston.

Mary Ellen Russell, executive director of the MCC, told Lobby Night participants in a briefing at St. Mary’s High School in Annapolis before the legislative meetings, that the bill the House passed “does not fully protect religious institutions.”

“Do not accept that argument (from lawmakers),” Russell said. “If this issue is about providing legal protection to loving, committed couples, why can’t we do that through civil unions?”

Lobby Night was sponsored by the Maryland Catholic Conference, public-policy arm of the state’s Catholic bishops.