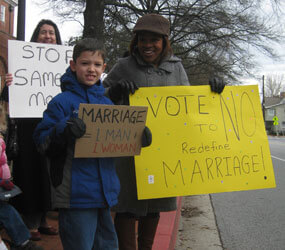 ANNAPOLIS – A bill legalizing same-sex marriage in Maryland is effectively dead for the current legislative session, after Del. Joseph Vallario of Prince George’s County asked that it be recommitted to the House of Delegates Judiciary Committee March 11. The move came at the end of a passionate and lengthy debate on the floor of the House of Delegates.

On a voice vote, delegates approved Vallario’s recommendation, and did not have to vote on the controversial legislation.

Stunned bill supporters wept in the halls of the State House, while jubilant pro-marriage demonstrators cheered and honked horns outside.

Mary Ellen Russell, executive director of the Maryland Catholic Conference, said it was “very clear” that bill supporters lacked the votes needed to pass this year. The measure had earlier made it through the State Senate, and Gov. Martin J. O’Malley promised he would sign it into law if it reached his desk.

“It’s a clear indication that despite the enormous pressure that the members of the House of Delegates were put under by House leadership to vote against their conscience or against the wishes of their constituents,” Russell said, “people of faith stood up and legislators stood their ground. The voice of the people was heard here.”

Russell said Catholic faith communities across the state played a major role in defeating the bill. Archbishop Edwin F. O’Brien had spoken out strongly against the measure and urged Catholics to contact their lawmakers on the issue.

“The entire church – from our bishops to our pastors to our parishioners –- really pulled together to ensure that the voices of Catholics in Maryland were heard,” Russell said. “It’s that kind of advocacy that swayed the day.”

“Those who desire to ride in on our coattails are historically inaccurate,” said the Democrat, an African-American Baptist minister. “The civil rights movement was about putting teeth into the Declaration of Independence. (It) had nothing to do with same-sex marriage.”

Burns said his life had been threatened for his opposition to same-sex marriage. He asserted that same-sex marriage “turns a moral wrong into a civil right.” It violates natural law, he said, and “always denies a child either a father or mother.”

Burns concluded by saying, “we must not abrogate, we must not dismiss our tradition.”

“To thine own self be true,” he said.

Although she described herself as a “pro-life, Catholic Democrat,” Del. Anne Healey of Prince George’s County said she supported the bill. She said she knew her position would disappoint many of her constituents.

“I believe I must vote to be sure that everyone is treated equally before the law,” she said.

Del. Cheryl D. Glenn, a Baltimore City Democrat, offered an amendment to change the marriage language in the bill to “civil unions.” It was rejected on a voice vote. She said she would be a champion for civil unions. She could not, however, support a bill that legalized same-sex marriage.

“I do know that marriage is an institution created by God for one man and one woman,” she said. “I cannot go against what my faith tells me.”

Del. Keiffer Mitchell, a Baltimore City Democrat, said the same-sex marriage issue pained him because he saw how deeply it divided the House of Delegates. A bill supporter, he said he would work to reunite a split legislative body.

Stay with The Catholic Review for much more on this story.