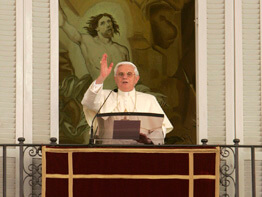 CASTEL GANDOLFO, Italy – Salvation through Christ is open to all, but the way is not easy because it requires a real commitment to love and justice, Pope Benedict XVI said.

The pope, speaking Aug. 26 to hundreds of pilgrims at his summer residence outside Rome, said that when Christ told his disciples the gate to heaven was narrow he did not mean it was for the privileged few.

“Christ’s message goes in the opposite direction: Everyone can enter into (eternal) life, but for everyone the gate is narrow … because it requires commitment, renunciation and mortification of one’s own egotism,” the pope said.

Christ made clear that people will ultimately be judged on the basis of their works in this world, he said.

“The evildoers will find themselves excluded, while those who have done good and sought justice through sacrifice will be welcomed. It will not be enough to declare oneself a friend of Christ,” the pope said.

“True friendship with Jesus is expressed in the way one lives: through goodness of heart, meekness and mercy, love for justice and the truth, and sincere and honest commitment to peace and reconciliation,” he said.

“This is the passport that will allow us to enter into eternal life,” he said.
Among those attending the Sunday blessing in the courtyard of the papal villa at Castel Gandolfo were new students at the Pontifical North American College, the center for U.S. seminarians in Rome. The pope welcomed the students and said he hoped their formation in Rome would help them grow in wisdom and charity.

The pope also greeted Muslim, Orthodox and Lutheran leaders from Kazakhstan, who were in Italy for interreligious dialogue encounters.
“Your gathering in Assisi and in Padua, together with your meetings in the Vatican, are a sure sign of the hope that mutual understanding and respect between religious communities can overcome distrust and promote the way of peace which springs from truth,” the pope told the group.