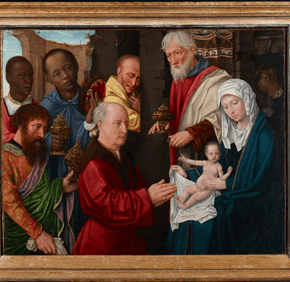 Portraits line the hall outside of The Walters Art Museum’s newest exhibit, “Revealing the African Presence in Renaissance Europe,” on view through Jan. 21 in Baltimore.

“What we want (visitors) to realize that it’s something they haven’t thought of before – it’s people,” said Joaneath Spicer, the museum’s curator of Renaissance and Baroque Art.

Opening with a Flemish painting of the Magi and closing with a statue of St. Benedict of Palermo – a 16th century Franciscan born in Italy to African slave parents – the exhibition explores questions of identity, perception and stereotypes of Africans in Europe between the late 1400s to early 1600s, with a focus on portraiture.

It includes 73 paintings, sculptures, prints, manuscripts and books from the Walters’ collection, major U.S. and European museums and private collections. Public feedback has been positive since the exhibition opened Oct. 14, said Spicer, who joined the Walters in 1990.

The exhibition is designed in two parts. The first provides context with period maps, artifacts and artworks, overviewing of Europeans’ various and sometimes opposing presumptions of Africa. The second part introduces the viewer to Africans in Europe through portraiture, including works by Peter Paul Rubens, Jacopo de Pontormo and Albrecht Dürer.

New trading routes increased interaction between Europe and Africa in the 15th century, expanding Europeans’ knowledge of the continent. The first European voyage around Africa’s southern point was completed in 1499 – seven years after Christopher Columbus’ voyage to America.

As relationships between the continents increased, some African kingdoms sent dignitaries to Europe; in Rome, a residence was established for Ethiopian pilgrims and scholars. At the same time, Africans were shipped to Europe as slaves, replacing Slavic slaves.

Many of the exhibitions’ images are tied to Christianity. During the Renaissance, the Catholic Church was a significant patron for artists, and scenes from the Old and New Testaments and the lives of the saints were popular subjects.

“The primary message here is that the range of roles Africans played in Christian art at the times is the same as that in society itself – that is, the whole range,” Spicer said.

The Flemish “Adoration of the Kings” – near the exhibit’s entrance – was painted around 1500, and depicts one of the kings as African, although nothing in Scripture describes the magi’s origin beyond “being from the East.” An African king, who, in this oil painting, meets the onlooker’s gaze, and suggests “the universality of Christ’s message,” Spicer said.

The exhibition also highlights African saints who were venerated in the Renaissance, including St. Augustine, his mother St. Monica and St. Catherine of Alexandria. A painting of St. Maurice, an African and third century Roman commander in Thebes, Egypt, is featured prominently.

With St. Maurice, “it was not an extraordinary thing to have a black saint (in the Renaissance), or name your son for a black saint, which is not people’s idea of the past,” Spicer said.

Not all of the hagiographical references reflect a positive understanding of Africans, however. In an altarpiece depicting a third-century miracle of Ss. Cosmos and Damian, a man is healed when his sore-covered leg was replaced with a leg taken from a dead Ethiopian. Since Christianity abhors the desecration of the dead, the indicated acceptance of the African’s postmortem amputation may mean he was considered soulless, Spicer said.

Most European perceptions of Africa were limited to maps and literature, artifacts, African animals and encounters with Africans and their descendants. They generally found Africa distant, novel and sometimes disturbing – with its ferocious animals, unfamiliar customs and swaths of desert – causing “ambivalence toward forces beyond control,” according to exhibition material.

The exhibition explores “color” rather than the modern construct of “race.” As artifacts and artwork indicate, the color black, including dark skin in some cases, was associated with sin and death. In contrasting cases, black embodied beauty.

Pontormo’s portrait of Maria Salviati de’ Medici – a work from the Walters’ collection – includes a child on her lap. White visitors often view the child as white, like her caregiver, while African American visitors view her as black, Spicer said.

This portrait inspired Spicer to dig deeper into the African presence in European Art, ultimately sparking the entire exhibition. The child is Giulia de’ Medici, the daughter of Duke Alessandro I de Medici, the first duke of Florence, Italy, whom scholars believe had African ancestry.

A portrait of the duke, on loan from Florence’s Uffizi Gallery, is displayed next to that of his daughter.

“Revealing the African Presence in Renaissance Europe” intendeds to engage the nuanced tensions between skin color, perception and status – not explain them, Spicer said.

“We tried to be tremendously open,” she said, hoping the approach causes visitors to muse on the exhibition long after they have left the galleries.