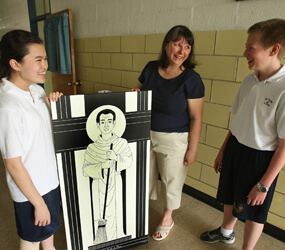 The spirit of service was reinforced during the 2005-06 year through the example of Julie Billiart, the foundress of the Sisters of Notre Dame de Namur.

Thanks to Peter, leadership has been the theme this school year.

At St. Rose of Lima School, students’ knowledge of the saints goes far beyond its namesake, a Peruvian who in the 17th century became the first person from the Americas to be canonized.

Since 1998-99, the parish school in Brooklyn has annually embraced a saint and a virtue associated with that figure. Religion teacher Ellen Mikula and principal Madeleine M. Hobik began the tradition.

“We desire to help our students enter into a more glorious communion with the saints,” Hobik explained, “by getting them to know their brothers and sisters in Christ. The saints, by their role modeling, might draw the students into their own friendship with God.”

The exercise encompasses seemingly everyone associated with the school.

Students are rewarded when they display the desired quality. Teachers embrace the movement. The saint is referenced at the opening Mass of the school year celebrated by Father Joseph M. O’Meara, pastor of St. Rose of Lima.

“We practice and incorporate this idea of virtue throughout the year,” said Sharon Wible, librarian.

The custom includes the seventh grade selecting the saint and a quality associated with that figure, which the entire student body will aspire to in the ensuing year. Last spring, it quickly became apparent what aspect of Peter’s life would be emphasized.

“He led the other apostles,” said Kaitlyn Gamboa, an eighth-grader who will enter Mount de Sales Academy in Catonsville next fall. “Jesus gave him the keys to heaven, and that’s why we chose leadership as this year’s theme.”

John Wells, a fellow St. Rose of Lima parishioner who will head to the Franciscan scholars program at Archbishop Curley High School in Baltimore, recalls past years, when students learned humility from Martin de Porres and respect from Patrick.

“Our seventh-graders do a deep study of the saints throughout the school year and find one whose life has meaning to them,” Hobik said. “They discover these people who came before them, who had trials and tribulations and overcame them, for the greater glory of God.”

Candidates for 2009-10 included Ambrose, Catherine of Siena and Thomas Aquinas. On May 7, the seventh-graders settled on Dominic Savio and set about choosing one attribute of his to be emulated.

Leaning on their research, boys and girls recounted the life of a 19th-century prodigy from Italy. One girl explained how he calmed friends on the verge of violence by showing them a crucifix and reminding them that “Jesus forgave his enemies.”

Another student related how Dominic Savio, on his deathbed at the tender age of 15, had a smile on his face and spoke of “what wonderful things I have seen.”

Of all the attributes he displayed, Dominic Savio’s loyalty to God was the overwhelming favorite among the class of 2010.

The next order of business is the commissioning of an ink drawing by Chad Grob, a former St. Rose of Lima student who went on to Mount St. Joseph High School in Irvington and Anne Arundel Community College.

His depictions of the saints are displayed throughout the school. His drawing of Peter will be unveiled on the church altar at this year’s graduation May 29.

“That,” Hobik said, “is what Catholic education is all about, getting them to know God more fully.”