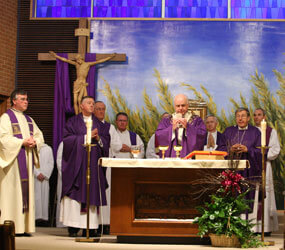 During the last five years, Our Lady of Victory has learned the true meaning of the word “sacrifice.”

The Arbutus faith community worked tirelessly during a capital campaign to renovate the church and reinvigorate the parish. It meant months without the church as a spectacular new welcoming space was built, while the inside of the church was updated. The parish hall became a place of worship during the last year.

The archbishop said parishioners had “concern for neighbor and future generations,” during their campaign.

“It’s a sign that during Lent anything worthwhile takes sacrifice,” he said.

When the archbishop blessed the gathering space after Mass, he recalled visiting the modest church upon coming to the archdiocese two years ago.

He asked the parish’s pastor, Father Timothy B. Klunk: “Where is the church?”

On March 13, he looked out to smiling parishioners and said, “I think we all know where the church is.”

More than 100 people could fit in the gathering space, which features historic stained-glass windows that were once displayed at St. Mary’s Industrial School’s chapel, which existed on the campus where Cardinal Gibbons School now operates.

As the sun began to set, lights inside the gathering space hit the windows, showing off the spectacular “Munich style” windows, which have been in Our Lady of Victory’s possession for more than 50 years.

The new touches were evident in the church as well.

Pews were renovated along with much of the interior during the last few months. The tabernacle was re-positioned and is now in front of a mural of a high-rising wheat field. The art was contributed by Father Klunk, who said the parish had been dreaming of the renovations for many years.

“It has created a whole sense of optimism about our future, our ability to form community and to be church,” Father Klunk said. “The setting is beautiful and inspiring. The people love it, they really do. We’re looking forward to seeing what we can do with that space because it’s about people.”

John Jenkins, a former parishioner and student at Our Lady of Victory School, played an integral part in the capital campaign. During a post-Mass dinner and reception in the parish hall, Father Klunk thanked Jenkins and others for their contributions.

Jenkins, who attended Cardinal Gibbons as well, said special attention was paid to the design of the gathering space. He said he received financial support throughout his Catholic education and wanted to give back.

“These people are really modest and it’s nice to do something for real genuine people,” Jenkins said.