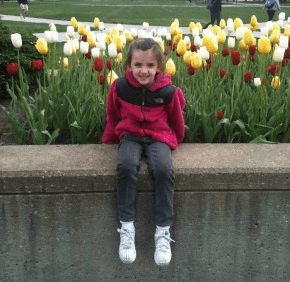 By Elizabeth Lowe
elowe@CatholicReview.org
Susan Surine and husband Phil are parents of six children. Their youngest, Ally, has autism.
“Our day is fairly typical,” said Susan Surine, a parishioner of Sacred Heart in Glyndon and a resource teacher at its parish school.
Like other families, the Surine’s weekday routine includes eating breakfast and heading to school.
“The main thing with her that would be different is if the (house) doors open,” said Surine, 43. “It’s a panic.”
The Surines worry about Ally, 9, wandering because children with autism can be prone to it.
Another difference is that Ally is a picky eater.
“I’ll make her something else,” Surine said. “It’s just how it is; it’s just what we know.”
About one in 68 children has autism spectrum disorder, according to estimates from the Centers for Disease Control and Prevention’s Autism and Developmental Disabilities Monitoring Network. Autism spectrum disorder is a developmental disability that can cause significant social, communication and behavioral challenges, according to the CDC. April is Autism Awareness Month.
Ally is in the middle on the autism spectrum, Surine said.
“Her needs generally are around the conversation piece,” she said. “She has an iPad and she’s a wiz on it. It’s where she can explore and not need to work so hard.”
Ally is a second-grader at The Shafer Center of Early Intervention in Owings Mills, a private, non-public school for children with autism and other developmental delays. She plans to attend Kenndy Krieger School in Baltimore beginning in July.
“Our goal is for (Ally) to be as independent as possible,” Surine said.
Being a part of a large family has taught Ally to be flexible, which “is not an easy thing for people with autism,” said Surine, whose five other children range in age from 10-20. “She doesn’t seem flustered by things.
“She has helped us to see what’s important and what isn’t important,” Surine said. “It’s so easy to get caught up in things.”
Also see:
Confession in every church April 11
Archbishop Spalding stands out for commitment to sharing meals with the homeless
PrevNext