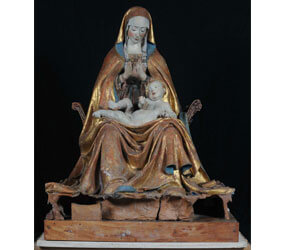 VATICAN CITY – Liturgical and religious objects that were recovered from churches damaged or destroyed by a powerful earthquake in central Italy are on display at the Vatican Museums.

The March 31 to May 31 exhibit, titled “Memory and Hope” marks the one-year anniversary of the magnitude 6.3 earthquake that hit the province of L’Aquila.

The exhibit is meant to pay homage to the people who have endured much hardship because of the quake and to offer the public “visible signs” of the tragedy, said Antonio Paolucci, director of the Vatican Museums.

The April 6 quake and its string of aftershocks left some 65,000 people homeless, nearly 300 people dead and another 1,500 injured throughout the mountainous region.

Paolucci said at a press conference March 30 that the religious antiques were being displayed in the condition they were found when workers sifted through piles of debris.

Each of the 200 antiques is in need of a sponsor, and donations are being accepted to help fund the repair and restoration of the valuable artifacts, which date from the 15th to the 18th centuries.

Among the precious works is a painted and gilded terra-cotta statue of the Blessed Mother and the baby Jesus crafted by Saturnino Gatti in 1507. It was recovered almost intact – the fingers on the infant Jesus and Mary’s praying hands were damaged – from the Basilica of Santa Maria of Collemaggio. The 13th-century basilica in the center of L’Aquila suffered major damage, including a collapsed roof.

Paolucci said visitors and benefactors can “adopt” any of the artifacts by making even a modest donation towards the work’s restoration.

He said it is relatively easy to raise money to restore famous works of art, while minor works and sacred objects are usually considered less important and are neglected.

“It’s a silent impoverishment,” he said, because losing antique objects that had been the pride of the local community “means erasing or forgetting the connective tissue of art and faith which supports the cultural and religious identity of a city.”