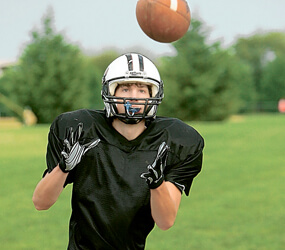 While John Rybak has been a versatile standout in indoor and outdoor track and field for Archbishop Curley High School, the 17- year-old senior had never been much of a pole vaulter.

That changed this summer, when he enrolled in a pole vault camp at Georgtown Preparatory School in Bethesda to improve his skills.

The young parishioner of Our Lady of Mount Carmel in Essex displayed that same industriousness when he tried out for football for the first time this year, making varsity as a tight end.

Rybak has shown similar tenacity in the classroom, maintaining a 3.8 grade point average, taking advanced placement science courses and holding a class ranking of 15 out of 139.

Eugene Hoffman, Rybak’s track coach, said the young man’s commitment makes him a success. Hoffman knows something about that quality, as he is currently in his 100th season of coaching cross country, indoor or outdoor track at his alma mater.

“It’s nice to have a hard worker like him around,” said Hoffman. “He’s an excellent student and he’s taking some really high-powered courses.”

Rybak is particularly known for his prowess as a hurdler, as he finished second in the 55-meter hurdles at the 2009 MIAA indoor championships.

Rybak has been an all- MIAA selection in indoor and outdoor track and has been in the MIAA decathlon the past three years. In April 2009, he ran a leg on the Curley 4×400 relay team that shined at the Penn Relays, which annually has the best attendance in the nation. His fastest relay split is 51.2 seconds.

The quiet senior, who serves as vice president of his school’s student government, said he enjoys track because it’s a sport where there is clear accountability.

Rybak is still selecting a college, where he hopes to pursue track and field. He expects to major in the sciences.

“I know I’m not going to make a living off of sports,” he said. “You have to use your head because that’s going to last longer than your body.”

Rybak attends weekly Mass with his grandparents and makes faith central to his life.

“It’s what you fall back on in life,” he said. “It gives you a set of morals that you can live by. It makes your life so much easier.”