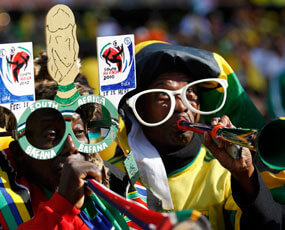 CAPE TOWN, South Africa – The sound of vuvuzelas made for a sleepless night for Rustenburg’s bishop as soccer fans watched, then celebrated the U.S.-England tie, and a Detroit-born priest now working in rural South Africa cheered the U.S. performance.

Bishop Kevin Dowling of Rustenburg, who lives less than a mile from the 44,000-seat Royal Bafokeng Stadium, said there was “an incredible sense of celebration” among local residents and visiting fans, who included U.S. Vice President Joe Biden.

Rustenburg, a mining town in North West province whose name means “Town of Rest” in Afrikaans, is one of the smallest of the nine cities hosting the World Cup.

“It is amazing that sport is able to unite the nation like this, and I hope we can build on this spirit of unity when the tournament is over,” said Bishop Dowling in a June 13 telephone interview. He laughed as he told of the sound of thousands of people blowing one-meter-long plastic horns and depriving him of sleep.

Vuvuzelas are said to be based on kudu horns and rooted in African history.

Mariannhill Father Casimir Paulsen, a Detroit priest who has worked in southern Africa for more than 40 years, said he was “very happy” with the U.S. performance against England, though he said he “did feel sorry for England’s goalie,” Robert Green, whose fumble helped the United States tie the June 12 game, 1-1.

Father Paulsen’s pride in the U.S. team was matched by his pride in South Africa’s team, known as “Bafana Bafana” (Boys, Boys), “who did so well against a tough team” in the tournament’s opening match in Johannesburg June 11. South Africa tied Mexico, 1-1.

Father Paulsen, who is responsible for two parishes, said that in homilies June 13, designated World Cup Sunday by the Southern African Catholic Bishops’ Conference, he drew comparisons with the Immaculate Heart of Mary beating in tune with her son’s sacred heart and the “hearts of all South Africans beating as one” in their support of their soccer team.

In a June 13 telephone interview, Durban Cardinal Wilfrid Napier said the South Africans “will need to be at our best” June 16 to have a chance of beating Uruguay.

In a statement released as the World Cup opening ceremony began in Johannesburg June 11, the cardinal assured the South African players of his prayers and said the “collective breath of a nation is held” for them.

He urged South Africans to “welcome the world, encounter the world, learn from the world so that the world will know that we remain the Rainbow Nation, diverse and united.”