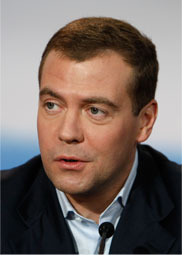 WARSAW, Poland — Russia’s Catholic bishops have urged the newly elected president, Dmitri Medvedev, to strengthen ties with religious communities and help remove bureaucratic obstacles to the work of foreign clergy in the country.

“We count on the new head of state to be able to do what he promised and meet the great challenges before him,” said Father Igor Kovalevsky, secretary-general of the Russian bishops’ conference. “Religious communities are very important here. We hope he’ll stay interested in them and see the need to develop the state’s relations with the different denominations.”

In a March 7 telephone interview with Catholic News Service, Father Kovalevsky said church leaders hoped to discuss their needs with the 42-year-old president, who chaired the Russian government’s religious affairs commission before his election. Medvedev won the March 2 election with more than 70 percent of votes on a 70 percent turnout.

“He has a good knowledge of religious affairs and did his job well as commission head,” Father Kovalevsky said. “But we also hope he will show care for ordinary citizens, at a time when the main problems of contemporary Russia are social and include a huge gulf between the richest and poorest people.”

Father Kovalevsky said that, during their meeting, the bishops had discussed problems faced by foreign priests, who make up most of Russia’s 280 Catholic clergy, in obtaining visas and residence permits.

“We are uneasy about this and trying to sort it out with the authorities,” Father Kovalevsky said. “Medvedev spoke last year about needing mechanisms to facilitate Russian citizenship for religious leaders. This would be helpful for Catholic priests working here, who still face lengthy and burdensome bureaucratic procedures when applying for the right to remain on Russian Federation territory.”

In a message to the new head of state, Russian Orthodox Patriarch Alexy II of Moscow said the election had “shown a high level of trust” in reforms by outgoing President Vladimir Putin, who now takes over as prime minister.

“You enjoy respect as a person with a cool head and kind heart, as a politician capable of dealing with the problems of … people and of realizing the highest moral responsibility,” the patriarch told Medvedev.