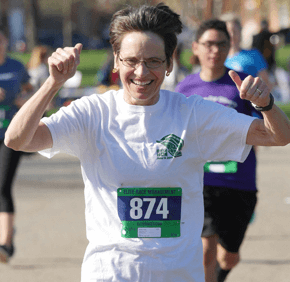 At any road race, runners exchange athletic tips and advice. At the third annual Runners for Others: An Ignatian 5K, spiritual advice was proffered as well.

“Are you married?” Jesuit Father Fred Pellegrini asked a male participant, after engaging him in conversation about prayer.

Father Pellegrini is vocations promoter for the Maryland, New York and New England provinces of the Society of Jesus.

The participant was married, but Father Pellegrini continued a substantive dialog.

“Are you attuned to your wife?” he asked. “Do you know what makes her happy, and what ticks her off?”

Receiving another affirmative, Father Pellegrini handed the participant a prayer card listing the five-steps of “A Daily Ignatian Examen,” a process of prayer designed to attune oneself to God’s presence in everyday life, so actions may be adjusted accordingly.

It was one of the weightier moments at the April 18 race, which included bobble-heads of St. Ignatius and photo ops with Loyola Blakefield’s cartoonish mascot, “Don,” who buoyed the spirits of the more than 200 runners.

Top 40 hits blared over the speakers as Jesuit Father Robert Hussey, provincial of the Maryland Province Jesuits, offered his congratulations near the finish line, near Patterson Park’s Pulaski Monument.

“It’s wonderful to be supporting the social ministries we are participating in and also just to see what a wonderful community we have,” Father Hussey said.

Baltimore Archbishop William E. Lori was the starter of the race, which raised a total of more than $16,000, or $2,100 each to eight local Jesuit ministries. The beneficiaries included the Baltimore-area’s Jesuit educators – St. Ignatius Loyola Academy in Baltimore, Cristo Rey Jesuit High School in Baltimore, Loyola Blakefield in Towson and Loyola University Maryland in Baltimore – as well as the Ignatian Volunteer Corps and Jesuit Volunteer Corps, and Jesuit parishes St. Alphonsus Rodriguez in Woodstock and St. Ignatius in Baltimore.

Jesuit Father John Swope, outgoing president of Cristo Rey, observed that the race was exposing his students to Jesuit ministries outside education.

“This is a real reminder to all of us of the importance of serving those most in need, through all of the Jesuit institutions and parishes,” Father Swope said.

The message was not lost on Cristo Rey sophomore Eli Romero, who said that he and his classmate, Dylan Lehew, were running because, “We wanted to help the community out.”

“It’s for our school, too,” said Lehew, a gentle giant who looks like the rugby player he is. “We love doing stuff for our school.”

Inspired in the same spirit was Emily Ford, representing the Jesuit Volunteer Corps, which matches volunteers to agencies in need of help and expertise. Ford, a paralegal and recent graduate of College of the Holy Cross in Worcester, Mass., is helping Baltimore City tenants who are being evicted or facing other housing difficulties.

“I really like it,” she said. “I think it’s a really good experience for people who have just graduated college.”

Archbishop Lori told runners to, in the words of St. Paul, “run the race so as to win.”

“You’re here,” he added, “to win the race not for yourself but for others.”