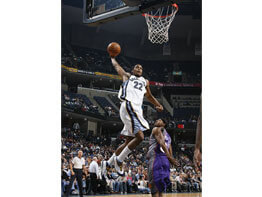 With the tip-off minutes away, Rudy Gay made his entrance quietly, sauntering into the gym ready to play.

Gay and 21 other past or present Division I basketball players gathered June 14 at their alma mater, Archbishop Spalding High School, Severn, to rekindle old friendships, run the floor for 40 minutes and pay tribute to the Class of 2007-08 Athletic Hall of Fame honorees.

This is the second consecutive year that the Hall of Fame ceremony and the alumni basketball game have been a combined event, and the second-year running that Gay, on the verge of NBA greatness, put on a show, albeit for a sparse crowd.

Dr. Michael Murphy, the school’s president, spoke of each inductee’s accomplishments as a Cavalier and concluded the brief program by proudly giving the signal to unfurl the newest red banner for placement high above the gymnasium rafters, identifying the newest Hall of Fame members.

As the inductee phase concluded, the alumni basketball players were introduced and the game got underway. Without a doubt, these players could shoot. Gay contributed a game-high 43 points, taking a number of opportunities to drill three-pointers from his favorite spot on the floor, just to the right of the free throw line, well beyond the high school arc.

When his teammates were open, a pass would come their way, whether they were ready or not. Gay was unselfish in his play-making but took a commanding presence inside with multiple drives, slams and quick put-backs.

The game went into overtime, knotted at 105 on an incredible series that took the ball coast to coast and into the hands of Gay who, in mid-air, drew all net to take his team into overtime.

“It’s really fun to kick it with the guys,” said Gay, who will be running a weeklong basketball camp beginning June 16.

The 6-foot-8 Gay, who averaged 20.1 points for the Memphis Grizzlies last season, said that he always wants to give back to the school.

“Spalding is a top-notch school and it prepared me, both academically and basketball-wise, for the next level,” said Gay, who turned professional after his sophomore season at the University of Connecticut and made his NBA debut two months after his 20th birthday.

It was an evening full of fun and laughter, including a Gay halftime slam-dunk contest. It wasn’t easy finding a good sport to go up against Gay, but Young, a U.S. Naval Academy student-athlete, gave it his best shot as the audience cheered for more.

“It’s just a great time, and I love coming back to the school,” said Young. “It’s like we never missed a beat here tonight.”