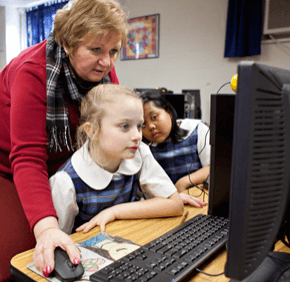 By George P. Matysek Jr.
gmatysek@CatholicReview.org
ROSEDALE – Catholic Schools Week will mark a significant milestone in the history of St. Clement Mary Hofbauer School. That’s when 150 iPads will be delivered for educational use at the 301-student school in eastern Baltimore County – a technological leap that has students and teachers excited about new possibilities for learning.
“We work really hard at implementing a curriculum that meets the needs of every child,” said Pamela Walters, principal. “We do that very well with different levels of reading materials for the students. Our hope is that with a one-to-one device like the iPad, that’s going to enhance our ability to bring even more materials to them – to diversify the educational program even more.”
Walters foresees the iPads being used not only for classroom work, but during school excursions to the zoo and elsewhere. Students will use the devices to photograph and film what they see, editing elements for PowerPoint presentations or other projects.
The equipment was donated to the school through a $75,000 grant from the Mary Our Queen Fraternity of the Secular Franciscan Order that meets at St. Clement. More iPads will be purchased as part of a three-year plan to integrate the gear throughout the school, from pre-kindergarten to the eighth grade.
Walters said St. Clement works hard at embracing technology as a learning tool and not just a fad. The school developed an online program nine years ago called “Crusaders of Learning,” which allows teachers to post and access student assignments. Through Crusaders of Learning, which will be integrated with the iPads, teachers can give feedback to students. Students maintain an online portfolio of all their work from throughout their years at St. Clement. Parents can use the system to see what lessons their children are learning or to sign up for student-teacher conferences.
“If they buy their movie tickets online,” Walters said, “they should be able to schedule their kids’ conferences with teachers online.”
All students take a technology class at least once a week, which the technology teacher plans and coordinates with classroom teachers. A student may work on a social studies project, for example, not only during social studies class, but also during English, technology and library time. Activities such as the newspaper and yearbook are all done online.
Mackenzie Walker, a 10-year-old fifth grader, noted that in her English class, she had the opportunity to diagram sentences on an electronic white board.
“The teacher shows us how it’s supposed to be diagrammed,” she said, “and then we get to show her where things are supposed to go. It’s fun.”
Using technology for activities such as diagramming sentences, Walters said, “takes an old concept and really ups the ante and brings it into the modern day.”
Teachers have already received training for integrating the iPad into the classroom, the principal said. There will also be education for parents.
“We don’t just want to have the latest gadget,” Walters said. “We want to take a targeted approach to provide an academic enhancement.”
Also see:
Immaculate Conception School has winning entry in BGE video contest
Tuition chart highlights costs at area high schools
Catholic schools graduate strives for work-life balance
PrevNext