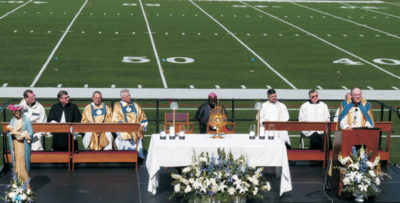 EASTON, Mass. – Holy Cross Father John Phalen told a crowd of about 1,000 Catholics at a June 6 rosary fest in Easton that “the rosary is a family matter because the family matters.”

The priest, who is president of Holy Cross Family Ministries, urged his listeners to “have a time and a place for praying the rosary daily and benefit from its healing presence.”

“Families are not chosen,” continued Father Phalen, “but are given to us by God. The family rosary is just what’s needed to place God at the center of the family unit.”

He also reported that children from a family where the father leads the rosary have a 95 percent chance of continuing on the Catholic faith.

Father Phalen, who is continuing the mission of famed “rosary priest” Holy Cross Father Patrick Peyton, was the opening speaker at the Family Rosary Fest held in the stadium at Stonehill College.

The event was part of Holy Cross Family Ministries yearlong celebration of the 100th anniversary of the birth of Father Peyton, its founder and a candidate for sainthood.

The fest included six keynote addresses with a rosary theme, including presentations by Bishop George W. Coleman of Fall River, and Bishop Yves-Marie Pean of Gonaive, Haiti. Between the talks, songs of praise and worship were performed in several languages.

Silveria Furtado, a member of Our Lady of Mount Carmel Parish in New Bedford, spoke in Portuguese on “Witnessing to the Power of the Rosary.”

“When I first got married, I prayed to the Blessed Mother for children,” said Furtado. “I wanted my children so I could teach them how to pray the rosary and tell them how powerful Mary’s prayer is.”

In a homily, Bishop Coleman spoke of “two dedicated sons of Mary who have zealously spread devotion to Mary through the holy rosary,” referring to Pope John Paul II and Father Peyton.

The bishop told of Father Peyton’s mission at a time early in his priesthood when “war was raging in Europe and starting to rage in the Pacific.”

“Father Peyton’s message was simple and straightforward: The family that prays together, stays together,” he said. “Father Peyton’s rosary rallies arose during a time of war and were intended to strengthen and defend through prayer to our Blessed Mother many thousands of families throughout the world.”

Father Peyton also coined the phrase “A world at prayer is a world at peace.”

“Our time, also, is a time of war and conflict. The rosary is needed today to beg the Lord, through Mary’s intercession, for a just and lasting peace among the peoples on our earth,” he added.

Bishop Coleman told the gathering that Pope John Paul saw a need for commitment and prayer in relation to the family.

“The family is increasingly menaced by forces of disintegration so as to make us fear for the future of the family and the future of society as a whole,” said Bishop Coleman. “Mary is like a teacher who opens up for her pupils the way to Christ, her Son. Through Mary we learn how to contemplate the face of Christ as she did.”

During a recitation of the glorious mysteries of the rosary led by Bishop Coleman, people dressed in the ethnic garb of different groups they were representing led prayers in English, French, Spanish, Portuguese, Swahili, Gaelic, Latvian and several other languages.

Children dressed in colored robes represented the beads of the rosary on the football field behind the bishop, and as each decade was cited, the “human rosary beads” stood.