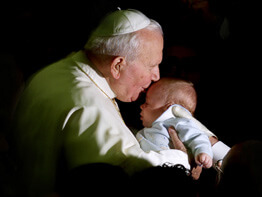 ROME – The Rome diocesan office charged with promoting the sainthood cause of Pope John Paul II has exceeded its postage budget because of increased requests for prayer cards and relics of the late pope.

“We were getting about 50 requests a day, but overnight it grew to between 500 and 1,000 requests,” a spokeswoman for the office said March 2.

“We could not have foreseen this demand,” she said. “It’s an avalanche.”

Franciscan Brother Chris Gaffrey, who assists the office with English translations, told Catholic News Service that the vast majority of requests in late February and early March were coming via e-mail from the United States.

CNS had published a story about the cards and relics Feb. 26 and dozens of Web sites and blogs, or Web logs, ran links to the story.

The prayer cards and relics, a small piece of one of the white cassocks worn by Pope John Paul, always will be distributed free of charge, but without an increase in donations the office cannot afford to mail them, Brother Gaffrey said.

While one writer kindly sent the office his express mail account number, others wrote requesting cards for their entire parish without even thinking of what it would cost to ship them from Italy, he said.

An individual prayer card, relic and copy of the cause’s magazine, Totus Tuus, could be mailed to the United States for about $5, Brother Gaffrey said.

Several options for sending donations can be found on the official Web site of Pope John Paul’s sainthood cause – www.JohnPaulIIBeatification.org – which was experiencing interruptions in service because of the increased traffic in early March.