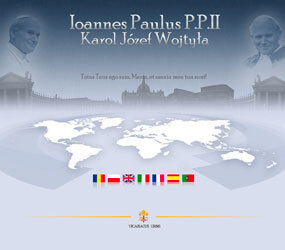 ROME – The Diocese of Rome launched a new website dedicated to the beatification and canonization of Pope John Paul II.

Published in seven languages, the site – www.karol-wojtyla.org – offers news updates and background information on the late pope and his sainthood cause, as well as a live webcam of his tomb in the grotto of St. Peter’s Basilica.

The website also announced that the beatification ceremony in St. Peter’s Square May 1, Divine Mercy Sunday, will be open to the public and no tickets will be required to attend.

The evening before the ceremony, April 30, there will be a prayer vigil at Rome’s ancient Circus Maximus racetrack, it said.

The website offers the diocesan-approved prayer asking for graces through the intercession of Pope John Paul in 31 languages, including Chinese, Arabic, Russian and Swahili.

A miracle after Pope John Paul’s beatification would be needed for his canonization, which is a church declaration that the person is a saint and worthy of universal veneration.

On Jan. 14, Pope Benedict XVI approved a first miracle attributed to the late pope’s intercession, clearing the way for his beatification.