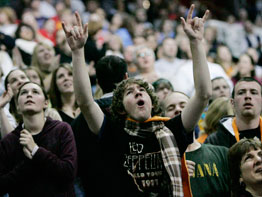 WASHINGTON – Roe v. Wade, the 35-year-old Supreme Court decision that legalized abortion virtually on demand, “will not stand,” Cardinal Justin Rigali of Philadelphia said in his homily at a Jan. 21 evening Mass that opened the annual National Prayer Vigil for Life.

“Roe v. Wade is incompatible with human dignity,” said Cardinal Rigali, chairman of the U.S. bishops’ Committee on Pro-Life Activities. “It must not stand. It cannot stand. It will not stand.”

His declaration drew applause from the packed Basilica of the National Shrine of the Immaculate Conception in Washington. It was one of five times that the cardinal’s remarks during his homily were met with applause.

Cardinal Rigali, echoing the New Testament reading from First Corinthians for the St. Agnes feast day Mass of Jan. 21, told the packed church that, “instead of choosing ‘great’ or impressive people in the eyes of the world, God uses the humble, the foolish, the weak and ‘those who count for nothing’ to accomplish his purposes.”

“It is when we least expect it that the tiniest among us can humble the powerful,” he said.

One example the cardinal cited was an embryo glimpsed by stem-cell researcher Dr. Shinya Yamanaka. The doctor was quoted in The New York Times as saying, “When I saw the embryo, I suddenly realized there was such a small difference between it and my daughters. … I thought, we can’t keep destroying embryos for our research. There must be another way.”

Yamanaka announced in December a technique that successfully turned adult skin cells into the equivalent of human embryonic stem cells without using an actual embryo.

“If God can use a helpless embryo to change a human heart, he can certainly use us with all our limitations and weaknesses,” Cardinal Rigali said.

“By seeking holiness and using the gifts God has given you to accomplish his will in your life,” he continued, “you are contributing mightily to that kingdom we all long for, where there will be no more crying or pain or death. Certainly no abortion. No euthanasia. No assisted suicide. No deep-freezing of embryos as though they were merchandise. And no destruction of human life in the name of science.”

Cardinal Rigali said, “Our value does not come from being so-called ‘productive’ members of society, but from Emmanuel, God always with us.”

He added, “We possess, or will be given, enough time and resources to build a culture of life together.”

During his homily, Cardinal Rigali drew a comparison between those attending the Mass and the new Knights of Columbus Incarnation Dome at the basilica, which required 2.4 million pieces of colored glass cut and assembled in Italy and shipped in 346 boxes for five months of installation.

“We too, dear friends, are called to a massive undertaking,” Cardinal Rigali said. “This urgent project is well under way, but we know it is far from complete.”

God “now sends you out, thousands upon thousands strong, to do your part in forming a vibrant mosaic on behalf of life,” he added. “You must be the ‘rich color’ he created you to be. You must play your role in his overarching design, and be patient with others as they seek to do the same.”

The earlier start of the vigil Mass – one hour earlier than in past years – appeared to make not one bit of difference in the numbers attending, as people squeezed into every pew, aisle, vestibule and side chapel in the basilica’s main church.

The number of participants in the sanctuary was similarly large, as the entrance procession – featuring seminarians, deacons, priests and more than 40 bishops who were concelebrants – took 30 minutes to complete.