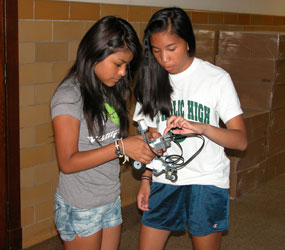 The young women were attending a mandatory robotics camp for the school’s STEM (science, technology, engineering and math) program at Catholic High, the only school in the Archdiocese of Baltimore to have a four-year STEM program.

The program integrates its four disciplines and allows students to expand their skills through hands-on experiences. The program starts with the summer robotics camp for incoming freshman.

At the two-week camp, the freshmen were given basic instructions and a goal to achieve. Through trial-and-error, the girls learned to use technology to solve problems.

Steve Cole, the robotics camp director, teaches engineering in Catholic High’s STEM program. Cole, who taught math at The Cardinal Gibbons School for 12 years, integrated robotics into some of his Catholic High classes last year, and hopes to get together a robotics team to compete with other schools in national robotics challenges.

With the great work ethic and enthusiasm shown by the new students, visible July, one of the hottest days ever recorded in Baltimore, Cole is optimistic.

“We get a mid-morning break,” Cole said, “but none of the girls take it. They just work straight through.”

Madison Fisher, a parishioner of St. Jane Frances de Chantal, Pasadena, worked on her robot with her partner, Rebekah Kempske, of St. Michael the Archangel, Overlea.

Both said their interest in the STEM program began with similar classes being introduced at their grade schools, and said that the STEM program was a deciding factor when choosing Catholic High.

“I might want to become an engineer,” Kempske said. “STEM is a great steppingstone for that.”

Another incoming freshman, Elise Murillo, expressed her desire to go into the medical field or work with engineering after high school. Like the other students, Murillo said that the STEM program is what drew her to the school.

As Murillo and her team member tried to park their robot, Principal Marti Meyd joked, “You just hit my car!” Meyd made herself present to the incoming freshmen, watching their endeavors and encouraging them.

“I’m totally amazed at what they do here,” Meyd said of the robotics camp.

The Catholic High STEM program started as a three-year program in 2008, with its first class of nine graduating this past spring. This fall is the first for its four-year program.

Students also have the opportunity through STEM to earn credits for college.

Dr. Barbara Nazelrod, president of Catholic High and a graduate of the school, said that the robotics camp is a great introduction to the program, as girls are get actively involved and learn to work as a team.

Nazelrod said the difference between having STEM classes and a STEM program is total immersion.

She also said that it’s important for girls to have access to STEM because often they aren’t given the encouragement they need to pursue a career in fields involving science or math. The STEM program is considered an extension of the school’s mission to empower women through education.

“It breaks stereotypes,” Nazelrod said. “It helps prepare our girls for the world they will inherit. One-size-fits-all education does not work anymore.”