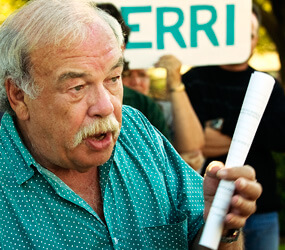 ST. PETERSBURG, Fla. – Robert Schindler Sr., a Catholic and the father of the late Terri Schiavo, died from heart failure early Aug. 29 in St. Petersburg. He was 71.

Schiavo, who died in 2005, was at the center of a lengthy legal battle that resulted in a Florida court ordering her feeding tube removed.

A funeral Mass for Schindler was to be celebrated Sept. 4 in Southampton, Pa., at Our Lady of Good Counsel Catholic Church. A private burial service was to follow at Holy Sepulcher Cemetery in Philadelphia.

“My dad was a man of integrity, character and compassion who was blessed with a close and loving family,” his son, Bobby Schindler, said in a statement. “He taught all three of his children to respect and value life and to love our fellow man.

“Even at the height of the battle to save my sister Terri’s life, when his patience and temperance was near exhaustion, he managed to display a gentleness of spirit,” he said. “Yet it was his unfathomable strength that allowed him to shoulder up his own heartache and lead us through our darkest hour. What greater legacy could a man leave behind?”

Robert Schindler and his wife, Mary, fought tirelessly for the right of their daughter to receive nutrition and hydration.

Schiavo had been in what doctors defined as a persistent vegetative state since 1990, when her brain was deprived of oxygen after her heart stopped. Doctors appointed by the courts had said she had no real consciousness or chance of recovery.

The Schindlers fought with her husband, Michael Schiavo, for seven years over the right to make medical decisions for her. They tried unsuccessfully to persuade state and federal courts that they should have the right to care for her, and, later, that her feeding tube should be reinserted.

Under a court order, Schiavo’s feeding tube was removed on March 18, 2005, based on Michael Schiavo’s testimony that his wife had told him she would not want to be kept alive artificially. Schiavo died two weeks later.

The Schindlers’ last appeal to the U.S. Supreme Court was rejected without comment hours before she died at a hospice in Pinellas Park.

“His witness of self-sacrificial love is a powerful one for us as we seek to love, provide care for and advocate on behalf of our most vulnerable family members,” she said in a statement. “Through his fidelity to Terri – and the foundation established in her honor – may others be spared the ordeal he endured.”

“In spite of enduring the heartbreaking, court-ordered killing of his daughter, Terry Schiavo, Bob never stopped fighting for the rights of others who were disabled or medically vulnerable,” he said in a statement. “His quiet strength in the face of persecution and his compassion for those who were too weak to defend themselves will forever serve as examples of how we should show Christ’s love.”

Through the Terri Schindler Schiavo Foundation, Schindler and his family became advocates for other medically dependent and disable patients after Schiavo’s death.

“In life, Bob (Schindler), and his wife, Mary, never sought the spotlight, “ said David N. O’Steen, the executive director of the National Right to Life Committee. “They only wished to care for their beloved daughter, Terri. Through their selfless dedication to Terri, they showed the nation and the world what it means when someone says they are ‘pro-life’.”

Schindler was born in Philadelphia Oct. 23, 1937. As an altar boy, he had once contemplated becoming a priest. Before his involvement in fighting to care for his daughter, Schindler ran a business selling industrial supplies.

Besides his wife and son, he is survived by another daughter, Suzanne Vitadamo, and a granddaughter, Alexandra.