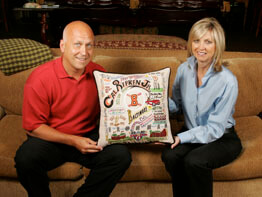 He’s a blue-collar baseball man through and through, with a work ethic and drive that has proven to be second-to-none. He is the pride of Harford County and the entire state of Maryland and on July 29, Calvin Edwin Ripken Jr. will enter the National Baseball Hall of Fame in Cooperstown, N.Y.
Crowds are expected to exceed 50,000 as busloads and carloads of Ripken fans make the trek to honor and celebrate baseball’s All-Time Iron Man.
Locally, the festivities to honor Ripken have been fast and furious over the last month leading up to the induction – including Cal Ripken Jr. Day in Harford County about a month ago to honor their hometown hero.
It was a display of affection for No. 8 as youngsters came dressed in their baseball uniforms, while other fans donned their orange and black; all withstanding the brutal afternoon heat for a glimpse of Ripken.
The 46-year-old Ripken told the crowd, that “when you are elected into the Hall of Fame, you go through many different phases of reflection.” Ripken had a dream to be a baseball player and said, “I can tell you that dreams really do come true.”
Ripken, along with San Diego Padre Tony Gwinn will enter the Hall of Fame with great pride and a long list of accomplishments.
Ripken, who retired from baseball in October 2001, played each of his 21 seasons with the Baltimore Orioles. He is one of only seven players in the record books to achieve 400 home runs and 3,000 hits and of course, in 1995, Ripken broke Lou Gehrig’s 56-year-old record of 2,030 for consecutive games played.
In 1982, Ripken was named the American League’s Rookie of the Year and in 1983 and 1991 was named the American League’s Most Valuable Player. Ripken was also honored with Gold Glove Awards in 1991 and 1992.
Ripken’s love for the game has continued even after his retirement from the Majors. He has published several books including “Play Baseball the Ripken Way.” He also was instrumental in the development and success of Ripken Stadium in Aberdeen, specializing in youth baseball and providing a home to the Class A Aberdeen IronBirds.
Ripken, along with his brother Bill, has remained an avid teacher of the game, reaching out to young people through clinics and camps across the region. In 2001, Ripken and his family established the Cal Ripken Sr. Foundation, set forth to target disadvantaged youths across the country.
Ripken’s legacy will always center around 2131 – the number of consecutive games in which he played to break Lou Gehrig’s record, his tireless work ethic, his willingness to give back to the community, his closeness and commitment to his family and his ability to reach out to those who love the game of baseball.
Parishioners and leaders of St. Joan of Arc, Aberdeen, shared some thoughts about Ripken.
St. Joan of Arc pastor Father Samuel V. Young said Ripken’s induction is a great achievement for baseball. “The fact that Cal was an honorable man and a family man and a product of this area, gives us some hope that people can do great things even beyond the fact that they are from a small city like Aberdeen.”
The pastor said the community is proud of Ripken for his contributions to the community, in addition to being a “great baseball player.”
Parishioner Carl Alexander said he grew up in Aberdeen during the “Cal Ripken era,” adding that Ripken grew up a mile and a half from his church.
“We are tickled to death for Cal; we are just very happy for him. It couldn’t happen to a nicer guy. In my mind, Cal Ripken revived baseball. In fact, Cal Ripken saved baseball,” he said.
Harry Webster called Ripken’s induction “very deserving.” He called Ripken a fine man and said the community looks up to him. He also praised Ripken’s family.
“I think his work ethic is something to be proud of. I worked with his dad long ago, and I can tell you that his entire family is one that you can look up to and be very proud of,” said Mr. Webster.
Rick Berndt, parish catechetical leader, shared in Mr. Webster’s praise of Ripken and his family, calling them pillars of the community.
“Cal is a marvelous model for young people, especially the ones that I minister to here at St. Joan of Arc,” said Mr. Berndt.
Parishioner Ann Marie Herud said Ripken has done a “wonderful job” of remembering Aberdeen, his hometown. She added, “I’m proud of the way Cal conducted himself all through his career. It’s such a great example to kids that I wish more sports people would do that, particularly today.”
Joan Lozinak agreed that Cal is a role model for children and said that he works at setting an example. “The induction is a great tribute to Cal and his family. He has a work ethic that is unsurpassed and is something to be envied today. His commitment to the community is great,” she said.