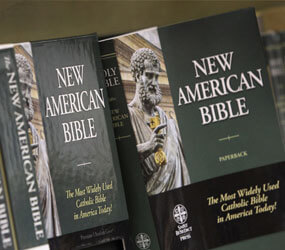 WASHINGTON – The revised New American Bible that will be released on Ash Wednesday, March 9, may seem most notably different to casual readers for its efforts at providing context and clarity in how the passages fit together, according to the coordinator of its publication.

“It will be like going from regular TV to high-definition,” said Mary Elizabeth Sperry, associate director of New American Bible utilization for the U.S. Conference of Catholic Bishops. “You’ll have the same programs but more clarity, more detail.”

The NABRE also will include the updated Book of Psalms, which was revised in three phases between 1991 and 2010 and has been included in Third Edition versions of the New American Bible published since 1991.

The new Bible will be available in an assortment of print, audio and electronic formats, from a variety of publishers. Individual publishers will roll out their versions on their own schedules. For instance, Oxford University Press announced its line of compact NABRE editions will be available by Easter, April 24, and its study Bibles will be on the market for fall 2011 courses.

The NABRE’s publication will not affect what Scripture texts are used for Mass. The Lectionary translation has already been updated recently.

Sperry explained that some of the updating in the Old Testament resulted from developments in biblical scholarship since the last time it was translated. For instance, recent archaeological discoveries have provided better texts, which affected scholarly views on how certain passages should be translated, she said.

The goal of retranslating the Old Testament was to “get it closer to the original language,” Sperry said. Scholars start with the original Hebrew or Greek text, for instance, rather than simply working from the 1970 New American Bible version, or from translations used in other Bible editions.

For the most part, the changes will be hard to spot, except by those who are serious students or scholars, she said.

In other places in the NABRE, even casual readers may catch the differences.

She and Benedictine Father Joseph Jensen, executive secretary of the Catholic Biblical Association and one of the scholars who worked on the translation, both gave two examples of the type of changes everyday readers might notice: the disappearance of the words “cereal” and “booty.”

The goal when possible was “to make the language more contemporary,” said Father Jensen. In today’s culture the phrase “cereal offering” conjures up images of Wheaties and Cheerios, not the bushels of wheat type of offering that the term is intended to mean, he said.

The word “booty” also has taken on the slang meanings of “buttocks” or sometimes, “sexual intercourse,” instead of its primary meaning of “plunder,” such as a marauding army might acquire.

Sperry said another change made for contemporary readers was the elimination of the word “holocaust” in favor of “burnt offerings.” Since millions of Jews were killed in German death camps before and during World War II, the word Holocaust has gradually come to specifically refer only to that period of history, she explained.

Kathleen Nash, associate professor and chair of the Religious Studies Department at Le Moyne College, translated the books of 1 Samuel and Joel for the NABRE. She joined the process in 1996, several years after the team of translators got started.

It turned out to be a long-term commitment. The editorial board met one weekend a month for years, reviewing each others’ work, sometimes spending multiple weekends on a single book, she explained. Later the group’s meetings revolved around queries from bishops who had their own questions and suggestions after they received the translations.

“For a good number of years, that’s all I did: live and breathe translation,” Nash said.

Coming into the work fairly early in her academic career, Nash said, she was very excited to be involved in the process, especially since the team was “a good mix of senior and younger scholars. … we worked well together.”

There were disagreements, to be sure, such as over whether the pronoun “he” should be used in all references to God, she said. Another effort was made to substitute “it” for references to the church as “she.”

The completed Old Testament revision was approved by the bishops at their November 2008 meeting. In 2010 the bishops signed off on the latest revision of the Psalter, as the book of Psalms is called.

The publication of the revised Bible also reinvigorates an ongoing dispute between the USCCB and the Catholic Biblical Association over royalties from the sales of Bibles and other publications that use the translation. A decades-old agreement under which the association received 25 percent of the royalties from sales is in limbo. In 2008, the USCCB stopped payment of the royalties while pursuing a renegotiation of the contract.

The two sides entered into the process of conciliation provided for under canon law. Both the USCCB and Father Jensen declined to comment on the specifics of the case.

In a statement to CNS, Sperry said: “At the request of the CBA, the matter is in canonical conciliation. That process requires confidentiality. The bishops take the process seriously and will abide by its terms.”

Father Jensen said that conciliation effort “has not been effective, but we are continuing to try.”

Father Jensen said the suspension of the royalty payments had various ramifications, from the issue of who has the legal rights to the royalties to how the association would continue to pay for its program of scholarships and stipends for scholars and students.

The first year after the royalty payments were cut off, the Catholic Biblical Association had a $170,000 deficit because it honored the grants to which it was already committed, he said, adding that the association has suspended all its grants except for a few student stipends and a famine relief donation.