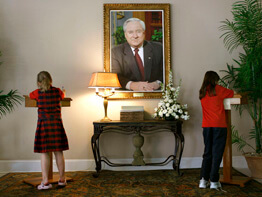 WASHINGTON – For many activists in the 1980s-era Moral Majority, there’s no doubt that the religiously based, politically conservative organization changed politics and religion for the better.

The election of President Ronald Reagan and a cadre of socially conservative members of Congress in the 1980s changed the direction of politics – particularly by rebuilding the Republican Party – and gave evangelical Christians a voice in elections and in public policy that continues to be strong. It also brought together evangelicals and Catholics in an alliance that raised the pro-life voting public to a position of prominence and power that it had not enjoyed as a primarily Catholic movement.

But for some of the Catholics who had key roles in the movement most closely associated with the late Rev. Jerry Falwell, hindsight suggests the Moral Majority’s call to get evangelical Christians involved in politics worked out better for the politicians than it did for the church.

Rev. Falwell died May 15, a bit shy of 30 years after the Moral Majority brought the minister from the “Old Time Gospel Hour” in Lynchburg, Va., to the halls of Congress and the White House as a valued adviser.

When Paul Weyrich met Rev. Falwell in the late 1970s, he was a former reporter and congressional press secretary who had helped create the Heritage Foundation, a think tank, and other conservative political organizations. It was Weyrich who coined the phrase “the Moral Majority” that Rev. Falwell would choose for the faith-based political organization with which the Baptist minister was most closely associated.

Weyrich, a deacon in the Melkite Catholic Church, told Catholic News Service that one success of the Moral Majority was the change it fostered in how Catholics and evangelical Protestants worked with each other.

He recalled an event at an arena in Texas to support a minister who had been booted off his radio station because of preaching against homosexuality. Rev. Falwell introduced Weyrich by pointing out that “he’s a Catholic,” and adding, “if any of you want to leave, go ahead.”

Perhaps five people stood up among the thousands in the arena. Weyrich said he saw that as “a change in the atmosphere from the time where Catholics and evangelical Protestants almost could not be in the same room with each other.”

Another time Weyrich and Rev. Falwell were on a speaker’s platform together when the minister observed that politics made the pairing possible.
“He said, ‘If you and I were discussing theology we’d probably come to bloody blows,’“ Weyrich recalled. “But we were not; we were discussing politics and so we were blood brothers.”

Richard Viguerie is another Catholic who was a part of the Moral Majority at the beginning. Currently the president of ConservativeHQ.com and the author of several books on politics and the conservative movement, Viguerie has since the 1960s owned direct-mail companies that specialize in political fundraising.

He said Rev. Falwell always was ecumenical, working with Mormons, Catholics and Jews as well as the Rev. Sun Myung Moon, founder of the Unification Church, sometimes to harsh criticism from other evangelicals. That church is now known as the Family Federation for World Peace and Unification.

But the Moral Majority was not always on the side of the leaders of the Catholic Church, Viguerie said, especially on hot 1980s issues such as U.S. policy toward Central America, the civil rights act and government programs to aid the poor. But, then, neither were politically conservative Catholics like himself.

“Jerry was always on the same side as the conservative Catholics,” Viguerie said.

He said that at his parish in Rappahannock County, Va., “when I would tell people that Jerry Falwell was a friend, they thought that was the coolest thing.”

Viguerie said Rev. Falwell believed that “we have to establish priorities, to fight our common enemies – communism, big government, liberals – then when that fight is won we can disagree about theology.”

Another Catholic, Deacon Keith Fournier of Richmond, Va., came to know Rev. Falwell because their circles of activities overlapped. Though never directly involved in the Moral Majority, he was in contact with Rev. Falwell in his one-time role as director of the American Center for Law and Justice, a religious liberty law practice founded by another television evangelist, the Rev. Pat Robertson.

Once a regular speaker at Moral Majority events who continues to admire much of what Rev. Falwell accomplished, Deacon Fournier has come to conclude that the religious right failed to live up to its promise, ending up “politically conservative, Republican and … mostly an evangelical Protestant movement,” as he wrote in an article published on the Traditional Catholic Reflections Web site, www.tcrnews2.com.

He told CNS that when it came to Catholic social teaching the Moral Majority only got part of the picture, primarily the one dealing with championing the right to life at all stages.

Deacon Fournier believes the breadth of Catholic social teaching – particularly the call to support the needy – was lost in the religious right, perhaps out of concern for political expediency.

Weyrich said when it comes to the advantages gained by tying itself to one party the alliance between evangelical Christians and the Republican Party has “probably helped the party. I don’t think it has helped the faith.”
He acknowledged a bit of personal disappointment at some directions taken by the movement he helped start.

“On occasion, Falwell and others would withhold a Christian position in order to accommodate a political position,” he said.

John Carr, the U.S. Conference of Catholic Bishops’ secretary for social development and world peace, has sometimes worked hand in hand and sometimes on opposite sides with the Moral Majority and the religious right since his days as director of the White House Conference on Families in 1979-80.

He lauded Rev. Falwell’s ability to persuade a generation of evangelical Christians that their faith had public implications, particularly bringing their conviction to the pro-life arena at a time when it was almost exclusively a Catholic movement.

But, Carr said, as an evangelical acquaintance put it, the movement learned the hard way that “identifying with one party on one issue has political and spiritual costs.”