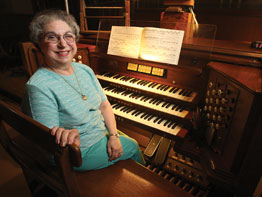 For Joanne Gardner, the music she plays on the organ at St. Stephen in Bradshaw has always been “for the honor and glory of God.”

An organist in the archdiocese for 62 years, she has spent 43 of those practicing her passion at St. Stephen, the last 20 as director of music. On June 30, Mrs. Gardner will be moving on to the next stage beyond her professional career – retirement.

“I just feel like I have so many obligations here, I feel like it’s time to relieve myself of some of the duties, although it’s bittersweet,” said Mrs. Gardner, smiling as she spoke about a fulfilling career marked by both a love of church music and music in general.

A parishioner at St. Stephen, she said she will continue to play a lighter load a few days a week at St. Alphonsus in Baltimore, where she is the principal organist.

“I was quite good,” she said. “When I was about 9 years old, Sister Mary spoke to my mother and father and said I should go to Peabody to be trained as a concert pianist.”

That never happened, as those aspirations conflicted with her father being diagnosed with cancer, which took his life in 1957.

“They say when one door closes, another opens,” said Mrs. Gardner. “Sister took me over to church and introduced me to the organ, and I loved playing the organ.”

She said she found an excellent music teacher in Frances Kline Brown, who taught her how to play hymns, as well as fine art music.

Mrs. Gardner has played at churches all over the archdiocese and at those of other denominations as well.

Perhaps the most memorable Mass the retiring music director has played was the funeral Mass for her music teacher at the Shrine of the Little Flower in Baltimore.

“Frances Kline Brown’s funeral was very touching,” she said of the January 2000 service. “She was very dear to me and a very wonderful mentor, and I was kind of like her protege.”

Many at St. Stephen, where she has inspired with her playing on a three manual Rodgers pipe implemented organ, think just as highly of Mrs. Gardner. The parish will celebrate the 12:15 Mass Sunday, June 29 in her honor, followed by a reception.

“She has a great sense of humor,” said St. Stephen pastor Father Lawrence Kolson of the organist who has received two Papal Blessings for her service and music ministry. “She is a very generous person with her time and devotion to the ministry, the church, and the parish.”

Cantor Margaret Muller called Mrs. Gardner a “friend, mentor, and teacher” who is “unselfish, giving in everything she’s ever done, supportive, and loving.”

Mrs. Gardner holds the same kind of admiration for her parish. “I love the way our people sing,” she said. “We have the most wonderful singing congregation, and it’s a thrill to play the music and have them respond in such a manner.”

The organist, who said she is “sometimes in the mood for Bach,” also takes joy playing in solitude.

“There’s a beautiful piece by Julian Zuniga,” she said. “It’s called ‘Suplica “Que Te Ame.”’ I like to be quiet in church and play that for myself. I just get a good feeling when I play that.”